Faeria Friday: The search for the Oversky

We’d like to answer a few of your questions about the Adventure Pouch, and more!

Since we revealed the first details of the Adventure Pouch: Oversky, the next chapter in Faeria’s future, we’ve been listening to all of your feedback and questions, and we decided it would be most appropriate lead off today’s Faeria Friday by answering them.

When we started imagining how we wanted to provide regular content and updates to Faeria (hugely based on your feedback, Co-Op Mode has been constantly the 2nd most requested feature since Early Access, just behind new cards), we really looked at how we, as players, would like to experience it. When updating Faeria with new content, we aim to make it a celebration that is tied to multiple aspects of the game.

With that in mind, we came up with the concept of the Adventure Pouch, a collectible item that would be the anchor of the first expansion by combining a new game mode, cards, cosmetics and in-game events.

We also didn’t want to reveal everything at once (and yes, more cool stuff is still to come in the remaining reveals). When we set our first War Effort target, we made a mistake in underestimating just how impressively fast you could gather gold, resulting in a poor timing and communication from us on Wednesday, and we would like to apologize for this.

The most important point we want to make absolutely clear, is that neither future cards, nor solo content, will be restricted to real-money purchases only.

We love it when you deem us worthy of spending some of your hard-earned cash, but we are proud of the even playing field that we have created, where you will always have the option of staying completely “Free to Play”(or F2P) and still collect plenty of cards to compete fairly against other players, as demonstrated by the many F2P players who have placed highly in our competitive tournaments.

The Adventure Pouch itself, when it launches, will only be purchasable with Gems, as it ties together cosmetics and special events (such as the Limited Co-Op Boss Battle). However, you will still be able to spend Gold instead of Gems to unlock the Adventure Pouch’s new Co-Op Campaign, as well as more that is still to be revealed. Once again, we promise that there won’t be any cards that you can’t collect as a F2P player.

We have created a Boards post containing all of the questions and answers we already had in our Adventure Pouch announcement blog, as well as answers to new questions that you have asked - and if there any confusion this doesn’t clear up, we will be happy to keep answering your questions and updating the FAQs topic on Boards.

###The search for the Oversky

During our stream on Wednesday, you may have noticed an official world map on display which introduced the concept of the Oversky. We’d like to share it here as well, for your viewing pleasure. 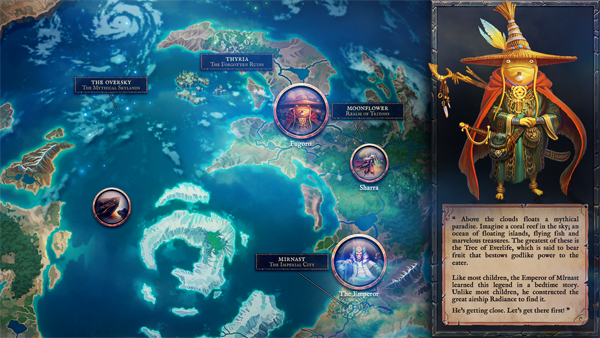 Here, you can see the Emperor’s new airship, Radiance, exploring the skies as it searches for the fabled land of the Oversky.

We know this will be many players’ first tournament, and we welcome you.

Interested in casting in official Faeria tournaments? We need you!

We’re looking for well-spoken individuals who know how to entertain a crowd and have a healthy technical understanding of the game. If you think you’d fit that role, please contact Nick “Tough Gunz” Secker at nick.secker@abrakam.com.

If possible, please include previous examples of your work.

##Battle of the Gods

The Battle of the Gods tournament took place earlier this week and was shown as part of our War Effort reveal stream.

Here are the decks used by the top four players:

As a note, we’re aware the new cards added this week aren’t yet on The Hub. Sorry for the delay, and have a good weekend!