Faeria’s first expansion, the Adventure Pouch: Oversky is now available - starting today! Open it up and begin your journey into the Oversky. 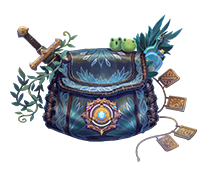 If you haven’t had the chance to grab your pouch during the preorder, don’t worry, it’s now accessible directly within the game and in gems. So head over there and make sure to grab your Adventure Pouch: Oversky to team-up with your friends and take on the Emperor and reap the exclusive rewards.

The beginning: The Emperor’s Daily Challenges

Your journey into the Oversky will start with the Emperor’s Daily Challenge. It will introduce a first of its kind co-op mode for you to experience! Each day, a new challenge featuring a unique rule for the match will be available to the players who own the Adventure Pouch: Oversky.

As you know, the Emperor’s Daily Challenges (also known as the Limited Boss Battle) are just a part of the Oversky expansion and will be introducing you to our new co-op mode.

Invite a friend and battle the mighty, greedy Emperor of Mirnast himself: Kaios.

Every day Kaios will have a new challenge for you to overcome. The first time you defeat him each day earns a lot of points for your Adventure Pouch!

By earning points for your Adventure Pouch, you can obtain an exclusive set of cosmetics featuring Emperor Kaios.

The voice of the Emperor

We’re happy to have partnered with Team Four Star to bring life to Emperor Kaios.

If you earn the Emperor’s avatar from the Adventure Pouch, you’ll be able to use the first ever emotes in Faeria with voice acting!

The Co-op campaign: Islands of the Oversky and 33 new cards

We will be releasing the islands of the Oversky every Tuesday, starting next week! Each island will come with its own unique set of cards. 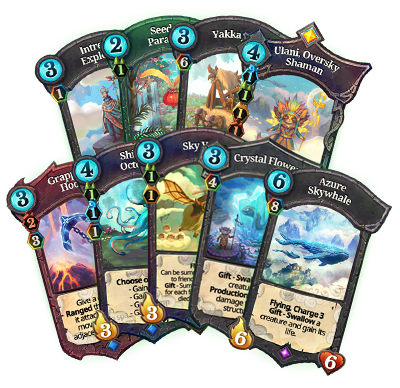 How does Co-op mode work?

When you enter co-op mode you will see a new board layout with three orbs on the field. You and your ally will be on the bottom of the field. Hover over your ally’s orb at any time to see their current Faeria, hand size, and land amounts.

You and your ally share a life total! Any damage you or your ally takes is delivered to both of you at the same time, so make sure to protect your friends.

For the Emperor’s Challenge, you must invite a friend to participate. Further adventures in the Oversky will allow you to choose an NPC ally.

Where can I get my Adventure Pouch: Oversky?

If you’ve pre-ordered it already, you’ll find it waiting for you on the main menu next to Sharra. Otherwise you have the option to purchase it in gems as part of the Pioneer or Supporter bundle.

What does the Adventure Pouch do?

The Adventure Pouch is a special item you can obtain to help you explore the Oversky, of which the islands will become available starting next week. It will level up based on daily activities you participate in, and award you various special cosmetics, gold, gems, and chests.

It also allows you to participate in the limited time, co-op only Emperor’s Challenge, also known as the Limited Boss Battle.

How long is the Adventure Pouch open for?

The Adventure Pouch and Limited Boss Battle will be open for two months, starting today.

For more comprehensive information about the Adventure Pouch and all of the Oversky, please read the following FAQ:

Ulani’s Medallion is a brand new treasure that is making its way to Pandora - starting today! Use it to transform all of your creatures into a base copy of your target. 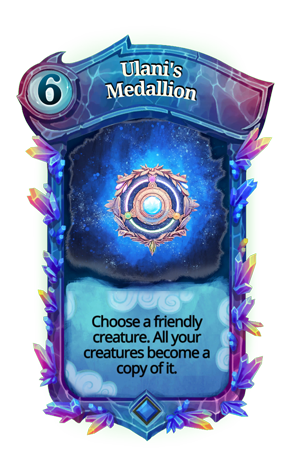 You may recognize this dangling trinket from the War Effort. With your efforts combined, you helped power up this special medallion, highly treasured and sought after by Fugoro.

About Oakling:
We’ve had our eyes on the current state of the game after the last set of balance changes, and believe it’s important for us to step in and correct a problem that has emerged with decks that tend to buff haste creatures in hand and win in one single, explosive turn.

We recognize there are a few ways to approach a solution to this problem and appreciate everyone’s feedback on the matter. We believe targeting Oakling with this change will still allow it to be a very powerful card with Feed the Forest, but not necessarily in a deck stacked with Haste creatures generally found outside of Green, and give us more comfortable room in our design space.

Season Reset and the Monthly Cup

All of today’s coincides with this month’s season reset, meaning the next Monthly Cup is this coming weekend.

Tune in this Saturday to FaeriaTV to watch the Monthly Cup and catch a new batch of Oversky card reveals, and dip into the first islands next Tuesday.

We hope you’re excited for a summer brightened by the Oversky!