Blue legendaries for a deck?

That’s it! I started playing Faeria just two days ago and I really fell in love with it. It’s not as deep as Infinity wars, which I also play but they game itself is really fun to play and the UI, the desing and the music are gorgeous! Also, the game seems well balanced and it looks like winning depends more on skill than having a bunch of legendaries. And talking about that, that’s my question: Which are the best blue legendaries when the time comes to craft? And how long does it take to craft them? I remember that I could never craft any shite on Hearthstone cuz the amount of dust you got from cards is ridiculously poor.

Hi ZebassZender! Glad your liking Faeria so far! Its a great game 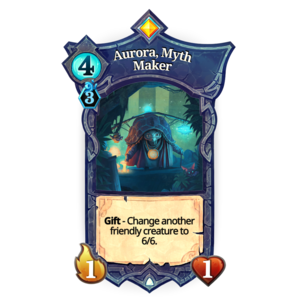 You can for example jump up to an enemy with a frog then give it 6/6 stats and kill a bigger creature! Or you can use it on one of your creature after combat to put it to 6/6 (working as a heal).

Another very powerfull blue legendary is Baeru, but it is much more difficult to play due to the high cost 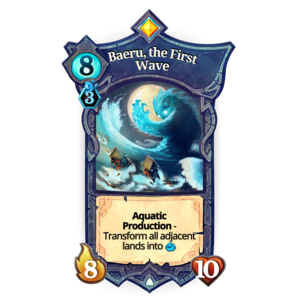 How long it will take for you to craft the legendaries depends so much on how much you play and how lucky you are, so its difficult to say

I think that aurora mith maker is the best blue legend.

To craft a legend it cost 320 dust, this isn’t that hard top get.

I agree entirely with J0k3se - Aurora Myth Maker is definitely the first blue legendary you will want to craft, as there are a lot of cool ways to use her to cheaply buff weak or injured creatures, and Baeru is the second one as he can be very powerful in the right situations to shut down non-Blue opponents (as well as give you a great body). Orosei is pretty bad in most decks but has some very niche uses, and Aurora’s Dream is almost never played.

How long it will take for you to craft the legendaries depends so much on how much you play and how lucky you are, so its difficult to say

Well I play everyday a couple of hours

Then you can probably craft it very soon!

But keep in mind that Rare and Epic cards are often atleast as useful as the legendary cards!

keep in mind that Rare and Epic cards are often atleast as useful as the legendary cards!

If you only want to count blue:

It took me 2 months just doing dailies and Pandora to get 9 different decks(Including two of the most expensive decks to craft at the time- DotD Wishes and R/B Bargain) After 6 months of playing casually(Two of those months I didn’t even play pandora) I have the full collection. Keep in mind that I got a bit of a boost from cards being nerfed and was gifted 24packs as compensation from Abrakam for major changes they made so it might take a bit longer. A dedicated player should be able to get full collection in 6 months, and a casual player maybe 8 months?
If anything that may be an overestimate.