Thought I would make a new custom card thread since the last one has gotten really long and cluttered, and because I just suddenly had an idea for a protection based series of red cards (although neutral would make more sense than red in the lore with the high-tech imperial line and also because combat burn doesn’t really need any more tools but i’m to lazy to change it now ;P) The shield generator is the main card here. I thought it would make an interesting new game plan where you try to stay around the same spot when fighting to get the protection bonus, not sure if it should be at the end of your turn or a production trigger. Also thought it would be fun for a structure to have protection to give it a little more stickyness against emperor’s command.

Also for any newbies, here is the website used for custom card creation: https://faeria-cards.com/create/

Another card in that line (imperial lore this time). Would probably be in place of the shielder.
Still not sure if this could ever really be balanced since each protection hit is 3 faeria worth of value but i’ma try =P

I think in decks without global damage, ie: Famine, Groundshaker; this would be super OP imho.

I do like that Virulent Instructor. The idea of recycling lands sounds like a fun idea. Although probably should specify if it’s random or not. So “destroy ‘a random’ unoccupied land”

The Grove Imp is an interesting concept. Although it’s value would vary a lot depending on the matchup. If the enemy runs any kind of removal it’s bye, bye grove imp. If the enemy doesn’t run removal it would easily be a full on steamroll with that value.

Xuxux (love the name btw =P) also nice concept but seems a bit odd in it’s colour identity. Yellow & blue don’t get any benefit from land ramping like green does, so I can’t really see this card being able to synergise with any other blue or yellow card. Would be hilarious to try to max out agains AI opponents though XD

Just had an idea for some green card set of “slow” creatures that move around in other ways. One of those ways would be teleporting. Thought it would be funny to have a creature that can’t move but can teleport.

Might want to be “at the start of your next turn, teleport to that land” but idk

Shpuld that Geomancer move when given Dash? because in soem scenarios he could be fun to play, or just good faeria well defender

Oh, I missread that, oops… That’s actually an interesting feature though. Against blue or yellow that would be quite a devastating game changer.

I think it would be able to dash when given. I also thought of a version where you make it move but it only does so the turn after but not totally sure how to write that on a card.

Also the instructor made me think of a card I made a while ago for the CCCC contest that I actually quite like.
Kinda goes into the meteor line 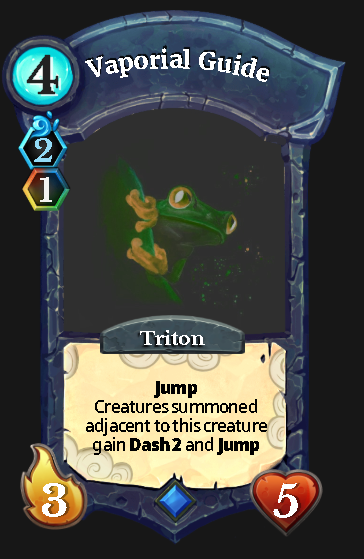 this is my baby

makes creatures liquid body mass warmer so they get lighter somehow… lol i have not studied enough to find out exactly how it works but… ill figure it out for science!

Haha, I like it. It’s like a mistral guide but for blue. Although if it’s gonna be a jungle triton it might fit better with the lore if it has a forest tile in it, idk

ah… true, good point… i suppose that is what the single wild land is for… perhaps i could make it more expensive as well?? hmmm

ABRAKAM!!! please look at my creation!!! you might love it so much that you put it into the gameeeee

i have another idea, we could make one for red that gives creatures ranged or some sort of combat burn or something… the green one would just give +0/+2 and taunt or something…