The following is commentary from the design team on the latest patch.

With 10 new cards coming into the game, we had a chance to really shake things up. No card exists in a vacuum. Often design choices and balancing for certain cards are made because of the way they interact with the rest of the environment. When that environment shifts, other cards might shift around them in a ripple effect. Let’s talk about this patch’s ripples. 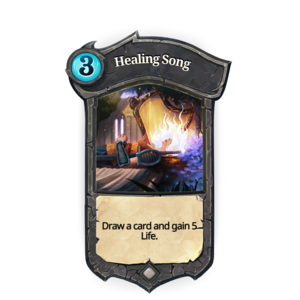 Healing has long been relatively weak in Faeria. Many tense games are often fought without either orb taking damage until the final turns. The last thing we wanted to do was let you trade excess faeria for more life. It would just give a bigger incentive to ignore the orbs and focus on harvesting.

This patch changes things. More than ever, life is a resource you can trade for value. Additionally, decks are gaining more tools to pierce a turtling player’s defenses. These new options ensure orbs are going to be taking a lot more damage than usual. As such, Healing Song gets a significant power boost. 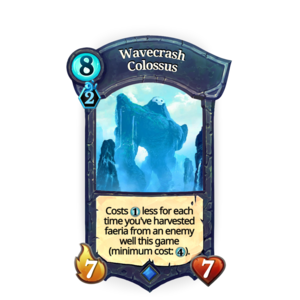 Wavecrash Colossus gained the new Slam ability in exchange for slightly increasing its base and minimum costs. Giving different abilities to the colossi helps further differentiate them from one another and Slam helps the colossus push through defenses to end the game.

Some people have noted that green has been getting a lot of new tools. This is intentional. Most of Green’s original mechanics that we had planned out proved to not be that fun in practice. One by one we cut them from the game. Green was thus left with a lot of similar stat buffs and not much else. This patch is the first step in reinventing Green’s slice of the color pie. 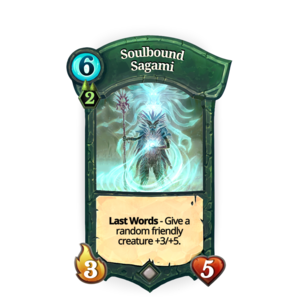 Soulbound Sagami has long been shunned in both pandora and battle modes. There’s no reason this creature needs to cost 3 forests, so we did a bit of clearcutting. 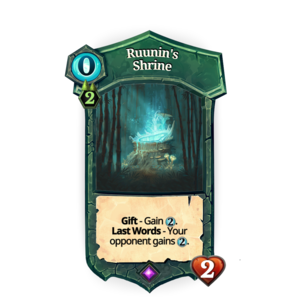 Complete redesign here. We liked the old Shrine’s gameplay, giving green a slick trick to protect its board state. However, it was a rules and coding nightmare. Firestorm was particularly irritating, but it was only one example. We also ran into an extraordinary number of awkward bugs while trying to make the card work consistently with the most common player expectations. Ultimately we judged the gameplay to simply not be worth these problems.

The new shrine gives you a bonus when you play it, then gives your opponent a bonus when it’s destroyed. This is very interesting gameplay. As green often relies on expensive threats, this also gives the color a much-needed burst economy tool. You can’t always draw Feed the Forest and Living Willow. 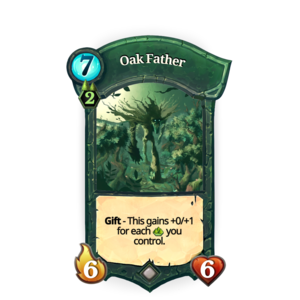 Slam is a tool to make it much harder to block gigantic creatures from cracking through your defenses. Oakfather is exactly the kind of threat we want to help push games to a conclusion. Green needs this kind of tool more than most colors. We’ve given its body a slight nerf to compensate for this. 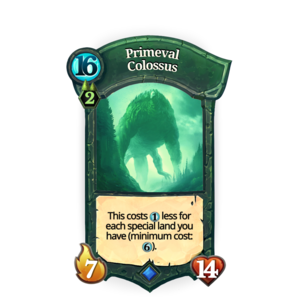 Primeval Colossus is the only Colossus to not get a new ability. Instead we shifted its stats around a little bit to emphasise its role in value trading rather than pure damage output. Green is getting several new facerush powerhouses and the Primeval Colussus was rather redundant with green’s main tools. 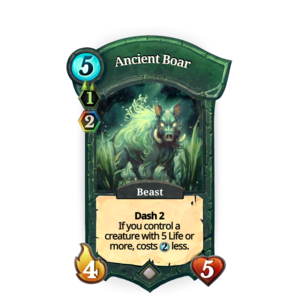 Ancient Boar was originally intended as a cheap creature to pair with beastmaster. Ultimately it turned out that a 2/5 body simply didn’t have enough weight to make an impact. We’ve reinvented the boar as a new value mobility tool for green. We actually have wild boars living around our office space, and we’ve seen them dash. It’s a good fit. 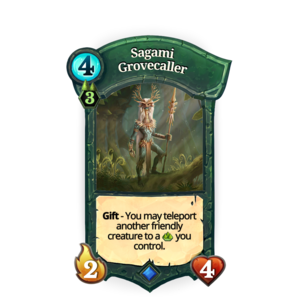 Green has long lacked utility effects. It can’t rely on bundles of stats alone. The new Huntmaster can call any of its allies to its side, offering repositioning tools to the normally sluggish color. 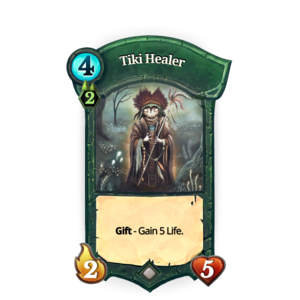 As mentioned in the Healing Song discussion above, life totals are now under a lot more pressure and healing is a lot more interesting. As a strict healing effect, unlike the choice offered by Ruunin’s Command, Tiki Healer got a buff for the same reasons that the song did. 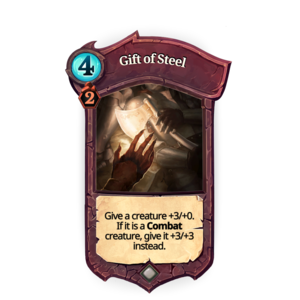 Gift of Steel has long been ignored. We’ve taken the opportunity to create some combat synergy. Red doesn’t usually give buffs to life, but red loves fighting so much that it’s prepared to make an exception. 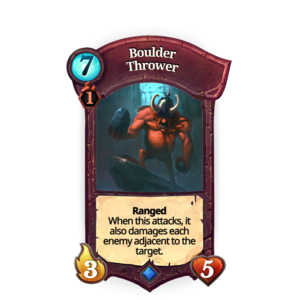 Slam fits the Boulder Thrower concept better than combat does. Combat was already a bit confusing on a ranged creature, and it sense that a gigantic boulder is going to slam into the target. 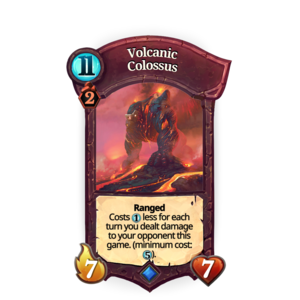 Red doesn’t need a colossus to push the game to a conclusion, it already has direct damage for that. We decided to use this slot for the biggest ranged creature so far. The game already offers a lot of ways to make a big creature, but a big ranged creature is a far more unique threat. 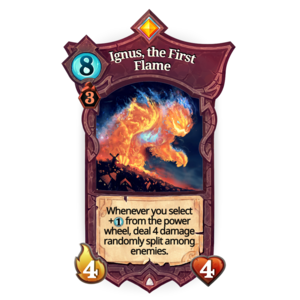 The new Ignus is far more worthy of his epic art. His original version was planned to deal 2 damage randomly split among enemies, but rolling only 2 dice can still produce very skewed results. However, upping the size of the effect to 4 means you’re effectively rolling 4 dice. It’s much harder to get drastically skewed activations when you’re rolling more dice each time. This also helps capture the wildfire feel of his art. 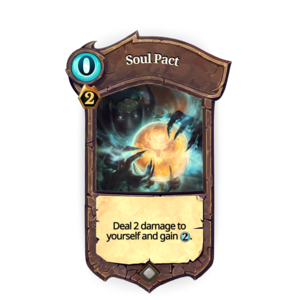 The previous Soul Pact was not quite strong enough to be consistently run in decks. We’ve increased the pact’s pain in exchange for letting you draw a card. Playing two Pacts means you deal 6 damage to yourself. That’s significant. It also means you’ll have a harder time playing the other new cards that let you trade life for resources. While it hasn’t broken the game in our testing, we’re still going to be watching it very closely after the patch. 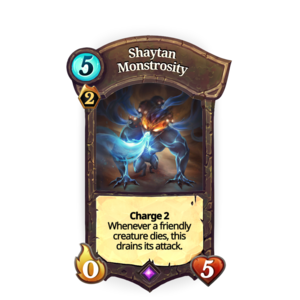 The vampire is going to become a very interesting tool in a metagame that treats life as a resource. We wanted to give it a slight mobility boost to help it do its job. 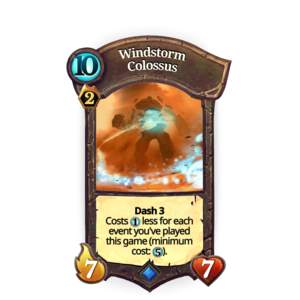 The Windstorm Colossus gets better stats and a sweet dash to go with them. Dash 3 is absolutely huge, and a big help for the two-color event decks that often like to play it. Event decks had also lacked giant threats that could close out the game (the previous colossus was a much more fragile 7/5). 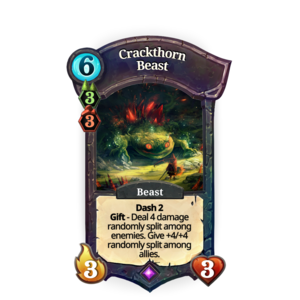 Warstorm Champion’s old design had its fans, but a creature that grows long-term only once its on the board is a poor fit for a multicolor design that already costs 6 special lands. You’ve waited long enough. This new design delivers instant satisfaction with a powerful gift on top of a savage threat.

The yak now has dash 2. We like our Treasures to feel a bit more exciting than a bundle of stats and an empty text box. This boost also helps the yak end games or rush into a crucial defensive position.

As always, we thank you for taking the time to read our thoughts. We hope you enjoy this latest set of changes!

I was going to say the same. Ruunin’s shrine was one of my favourite cards. It is a great idea that should not be thrown away because coding takes a bit more thought.

That’s a bug, should have that fixed by tomorrow.

So far really enjoyed all the patches, Soulbound Sagami being among my favorites.

That being said, I’ll have to chip in and say I was rather sad to see Shrine fall to an all-out change. I’d almost be inclined to work like “First creature summoned each turn gains protection” type of deal.

I can understand the logistical side of things, hopefully the new aggressive buffs will help push Green to where it won’t need it as much any more.