Let’s take a closer look behind our general philosophy on yesterday’s balance patch, and what to expect for the future.

Firstly, thank you for all your feedback on yesterday’s patch. We’d like to address some of it and speak more about some of our basic philosophy behind the direction of the changes and Faeria’s pace of development. If you haven’t read the patch notes yet, please check them out.

We recognize it’s been some time since the last balance patch, and with greater time comes greater anticipation for visibly larger changes to Faeria. The changes we implemented yesterday were the product of a long analysis of the metagame since November of last year. While the technical amount of changes is relatively small, the impact of nearly every one is considered to be very significant. With the exception of Dune Drake, each card adjusted were what we consider to be meta-defining cards.

By decreasing the power of very key cards in certain archetypes, we intend to indirectly open the path for a wider variety of decks to find their place in the meta. For example, when Green/Blue Ramp decks with Skywhale are popular, it tends to shut down many other styles of control decks. When few other control decks are playable, the next logical step for players to take is to counter the dominant control deck with Rush decks. This now creates an environment where Rush decks can be over-represented as a simple response to the prevalence of one single deck. Normally we would see mid-range decks emerge at the same time, but Green/Blue Ramp was often very effective against these decks as well. Therefore, it became clear to us that one single deck became the pivot point of the entire meta, and was twisting it in such a way that certain gameplay styles became ineffective.

Oversky taught us many things about Faeria. We knew the introduction of Wild lands would create radical changes in the way the game operates. We were expecting Green ramp style play to increase in power level across the board with the addition of powerhouse high Wild cost cards - which is why we made pre-emptive changes to cards like Wild Growth and released Seed of Paradise at a relatively timid 2 health. After witnessing the absolute domination of Green Blue ramp on Oversky’s release, we were quick to ‘hotfix’ Skywhale and Frog Tosser to more reasonable levels. Clearly we believe even that was not enough, which is why we arrived at the changes you see yesterday. The Skywhale change should speak for itself, but the Earthcraft change may not be as obvious in its goals. By keeping the Ramp engine at a more controllable level, we are able to continue to release powerful cards in the future at high Wild costs without having them default into one specific archetype.

Our investment into esports accomplishes multiple goals - one of them being that it gives us a viewing window into the performance of decks at the highest levels of play. It’s important to note that we understand very well that Faeria behaves very differently at various levels of play, but the competitive scene is often a good litmus test as to how ‘broken’ some things may be.

While not fully representative of the tournament meta, an easy way to examine the state of the game is to look at the decks used by the top players in tournaments as the months went by. A quick and dirty way to do this is to analyze our official tournament recaps and Manta Cup recaps, courtesy of community organizer xged

These brief snapshots over several months, if nothing else, illustrate that we continue to exist in an ever-evolving competitive meta. In December, the last Monthly Cup had all top four players running GY Sac as their main deck. In January, we see somewhat of a departure from this as GB Ramp takes the stage. In February we see more of a swing into Red Combat.

Yellow Rush and Red Rush is sprinkled throughout. Players run decks like Blue Jump, Yellow Tempo, Yellow Flyers, Red Yellow Burn, Red Bargain, Crackthorn, Blue Sevens, Blue Yellow flyers, Blue Yellow Jump, and even Green mid-range. While this information is not enough on its own to paint the true picture of the gameplay landscape, it certainly shows no pattern of a narrow meta. Our observations of the ladder in-game shows similar results with a decent amount of diversity.

Giving the meta room to breathe

None of the balance changes we settled on meant to destroy any deck, only bring them more in line with others and allow an even more robust meta to flourish. As we mentioned in the patch notes, we believe the general deck diversity being witnessed in-game is relatively healthy, but we wanted to improve it. We still expect and want Green Blue ramp decks to continue to be effective after this patch. No single change is expected to erase a deck from the meta, only even the playing field by a careful amount.

Faeria is a very complicated mechanism. It’s very easy to break the entire machine by increasing or decreasing the wrong card by the wrong Faeria amount.

In conclusion, we anticipate these seemingly subtle changes will bring a positive direction to the game, but don’t plan to stop there. As as we continue to observe and listen, we will always step in to push it back in the right direction when things go off the tracks. All of this is made possible with your help and feedback. Thank you.

We are keenly aware that the time between this balance patch and the previous was too long for many of our players. This is something we want to work hard to remedy in the future. We intend to make balance changes more frequently in the coming months.

Even better than balance changes in any form is fresh, smoking-hot content. We know there is no substitute for that, and are working on it.

In closing, we have some very important news we aim to share within the month that we hope will alleviate many of the concerns we have heard about Faeria and its future.

Yes, we don’t like “announcements of announcements” either, but we’re waiting on several more gears to fall into alignment before we are prepared to say more, and we think it’s important that you know. Thank you for your patience.

As a reminder for FWC Points, all three ladder resets for the Aurora season have now taken place. The next season reset (which takes place in April) counts for the season of Ruunin, which begins in April. 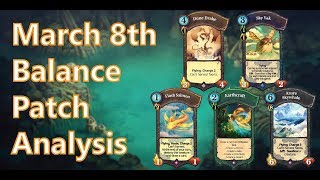 Note: These decks have been posted before the balance patch on Thursday

And then the end of month is near and no news.

Wait for today’s Faeria Friday announcement. It will be posted soon™

Atmaz just posted this on Discord:

Hey everyone. Today’s Faeria Friday will contain the important news we mentioned earlier this month. We expect it to go live in about 2 hours.

Thanks for your patience.