Some are hairy, some have claws, and some are just plain cute. The Beast subtype will be introduced this summer with Fall of Everlife.

We’ve shown you the Yak and Rakoan subtypes, but now it’s time for something with a bit more bite. 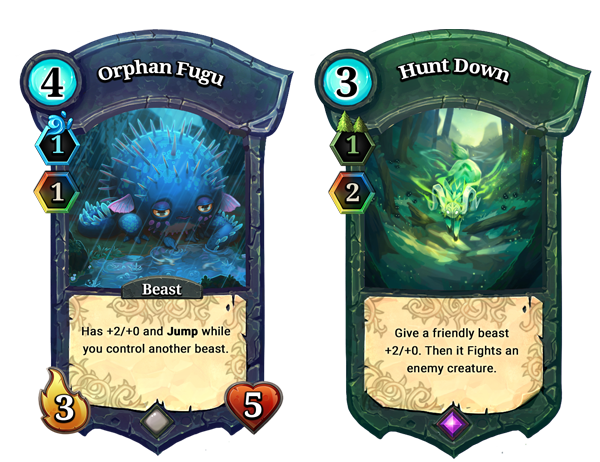 Beasts are the tribe that already have the most diverse cast of existing cards. This makes them an easy choice for us.

When looking at all potential Beasts that exist, from Deepwood Stalker to Gemshell Tortoise, it became clear that they would not all fit into one deck. This led to the idea of Beasts being a more solitary tribe with Beast ‘packages’ rather than trying to cram as many as you could find into the same deck. The beast tribal cards reflect this as they are flexible and only require a single beast to trigger.

While Yaks and Rakoans will be the main featured subtypes in Fall of Everlife, Beasts will be introduced as well.

The fourth and final subtype being assigned will be the Tritons - however, due to the limited amount of card slots in the expansion we won’t be including any synergy cards for them just yet. With each new batch of content, we plan on expanding on the newly introduced concept of tribes and growing it as time and card slots allow - while still fitting in all of the other cool stuff we’d like to print.

Where do subtypes fit in Fall of Everlife release?

As we mentioned previously, Fall of Everlife will be split into two equal parts of 20 cards each, the second batch unlocking about a month after the first.

In the end, we plan to give you as much information as possible about what to expect from each part of the DLC and when - so you know exactly what you’ll be getting.

As a reminder, with the release of Fall of Everlife we also plan on introducing many cool new features and improvements to the base game of Faeria that have nothing to do with Fall of Everlife. It all comes flying at your face July 18th.

We’ll soon be posting Q&A threads at our various hubs of activity for you to ask us anything you want. We plan to gather these questions and answer them live on stream the week before the release of Fall of Everlife.

Keep an eye out!

The next ladder reset is just around the corner- Monday, July 2nd.

This season reset is the first to count for points in the Season of Khalim!

Here’s a brief timeline of the major competitive events happening next month.

With these events, our Q&A stream, and the Fall of Everlife release - we’re very excited for a busy July.

As you may know, we released a huge balance patch earlier this week.

Here are a couple excellent community reviews you may want to check out:

One thing you probably don’t want to do, however, is make a deck using all of the buffed cards only.

Oh wait, someone did that already.

The final Championship League tournament of the Season of Ruunin is over! Click the above image for a brief recap.

Do you ever need to do 58 damage to your opponent? No.
Do you ever want to? Yes.

PyroManiacYT has put together a detailed guide on how to play the interesting deck known as GY Flyers.