A series of bug fixes went live today, and we’d like to share some design notes on the new cards we revealed this weekend. Aurora Cup recap, and more!

Today we applied some fixes to a few problems with card interactions.

Thank you to everyone who has sent bug reports on these issues and helped us identify these problem. We will continue to fix more bugs in time.

During last weekend’s Seasonal Cup we revealed 3 brand new cards that are coming this summer to Faeria. Let’s talk about them a bit. The following are notes from our game designers. 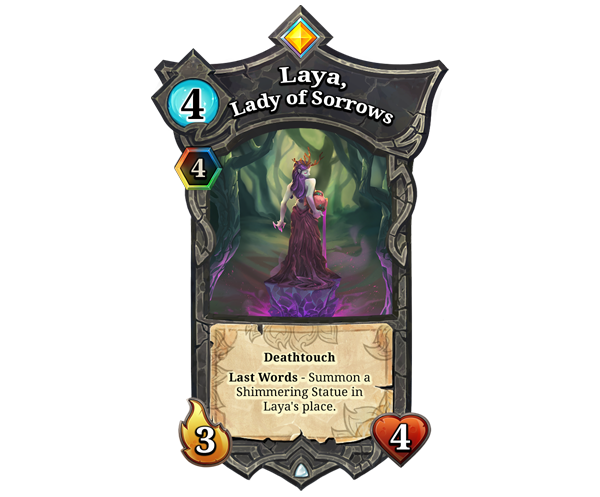 We’ve designed all three of these cards from a top-down approach. In other words, we started with a general concept and worked it into a playable card.

We wanted this card to reflect on a specific legend involving a beautiful woman who was known to haunt the deep woods of Erianor, yet has now mysteriously appeared in the Oversky. This story rarely reaches the ears of the population in Mirnast, yet for unknown reasons a statue of her is standing very nearby. Was she always so forlorn, or has this new source of corruption twisted her?

Gameplay wise, the true reason why we want this design is because we’re convinced the game needs more cards that leave some tracks on the board after dying. The play-tests have shown good results there. Having its board state change from a Deathtouch creature into a Taunt structure can challenge you and your opponent in a variety of ways. We also appreciate that we can add a new powerful Neutral Deathtouch creature within the safety of a Wild Land cost. 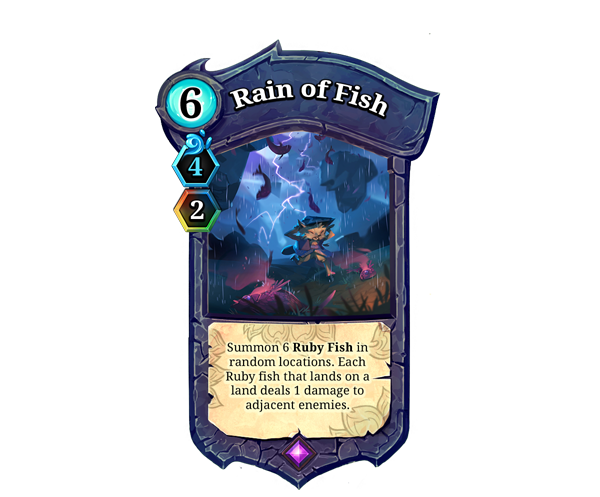 Randomness is undeniably fundamental in this design, but the fact that this random event gets repeated six times makes the effect acceptable in most cases. By repeating a random action many times, it creates a normal distribution where some extreme cases will be possible but very unlikely.

We’re generally not wild about random effects in Faeria, but because this card is able to deliver hilarious results and convey the chaotic theme of the expansion we decided to take the bet. We weren’t disappointed during our play-testing and moved forward with it. We don’t want you to expect this expansion to introduce a large amount of random effects, as they will be kept to a minimum. We’ve put a lot of creativity into finding different ways of conveying the chaotic/corrupted vibe of this expansion, and we believe there’s something to be excited about here. We plan on introducing several elements of corruption and chaos in various different forms: For instance, another twisted aspect of Rain of Fish is that it’s the first Blue card to deal direct damage.

This card also works with Illusion of Grandeur - a fun card that we’d like to encourage more deck building with. 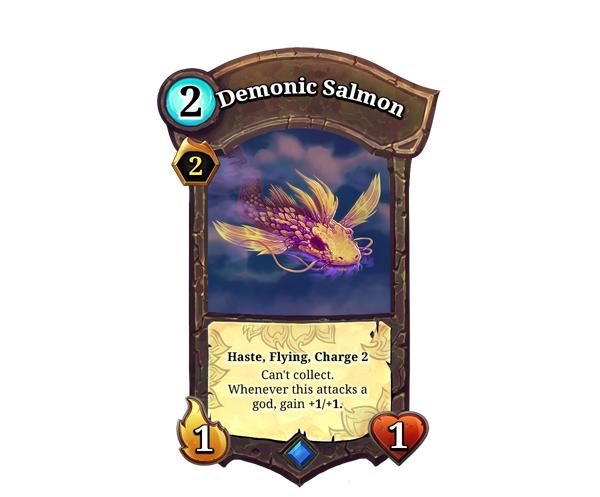 The Oversky is being bent into a new and very strange world. Many forms of life are mutating, and not in a good way
.
The design here is, as mentioned above, from a top-down approach. We asked ourselves, How could we twist the Salmon’s design into a corrupted entity?

This small and, quite frankly, grotesque fish can grow into an uncontrollable beast if your opponent isn’t careful. We expect it will definitely be used in Yellow rush decks and their variations, but we believe there’s a lot more potential here.
For instance, it could also to be used in synergy with green buffs, and maybe some solid taunt creatures to make sure your Salmon stays protected.

The Aurora Seasonal Cup took place Saturday, April 7th. Did you miss it? 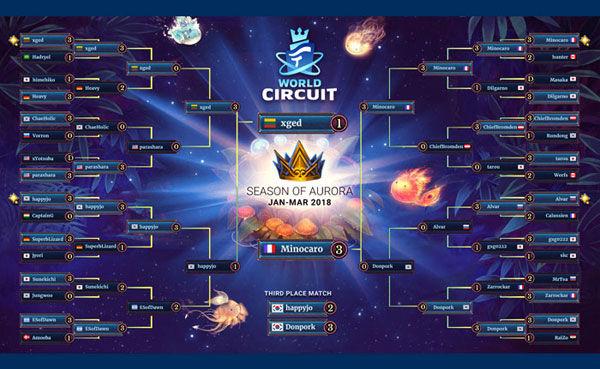 The first FWC Championship League tournament in the Season of Ruunin takes place tomorrow! Earn FWC Points and a chance at $400 in prizes.

Note: Scourgeflame Specter + Egg of Wonders is banned for this tournament until a specific bug with that interaction is fixed. Check our #tournaments channel in our Discord for more information.