Subtypes are coming, and some of them are pretty furry. Also: an important update on our release date for Fall of Everlife.

This summer’s Fall of Everlife expansion will introduce a new aspect into your deck-building experience: Subtypes.

Subtypes are a way we are grouping certain “races” or “tribes” in Faeria. Cards will have a new section added underneath the card art where this subtype will be displayed, if they have one.

Let us show you some examples, shall we? 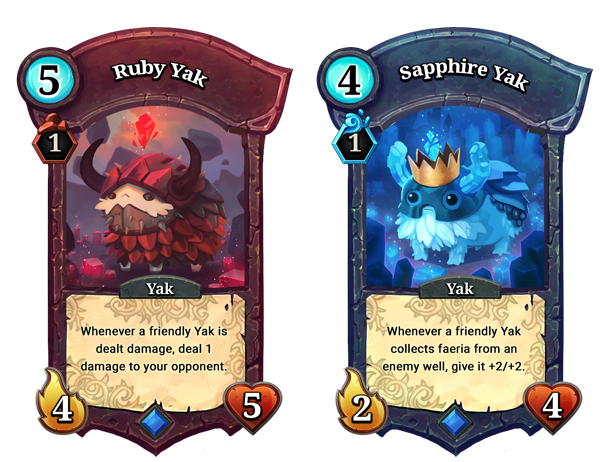 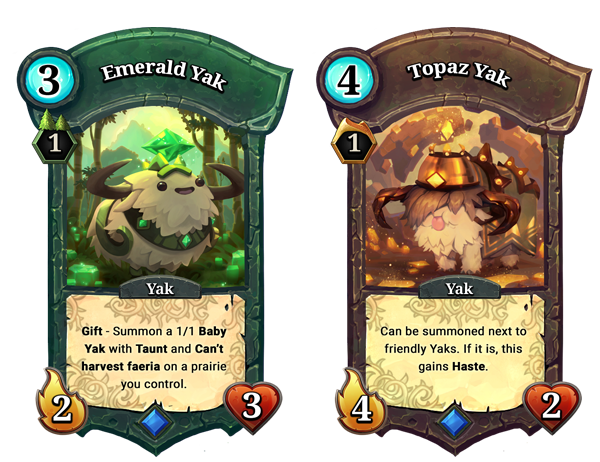 As you would expect, we will be introducing brand new cards that will interact with these new subtypes. In this case: Yaks.

Many previously existing cards will be updated to belong to these new subtypes. (Yes, Prairie Yak will become a Yak subtype.)

In total, with Fall of Everlife, we will be introducing four subtypes into the game. What are the other three subtypes? We’ll show you soon, but maybe you have some guesses already.

Tribes are something we have wanted in the game for a long time. They have huge amounts of flavor and are something many card game players enjoy. On the more mechanical side of things, Faeria can have a problem where often good cards tend to be good in every deck. For example, you don’t need to play a specific type of red deck to always want Groundshaker. All decks desire board control and efficient creatures, so most red decks will want to play it. Tribes allow us to make certain cards a little more restrictive, leading to more differentiation between deck types and space to design cards that would otherwise be too dangerous to print.

As soon as tribes were brought up, we knew yaks would have to be the first one. They may look cute and fluffy but their opponents will find them vicious as well! The yak tribe is primarily neutral with the gem yaks to support each color, so you’ll be able to knock yourself out experimenting with anything from full neutral to yaks of all colors.

A few weeks ago we announced we would be releasing in June. While our development schedule still has us completing the required work by then, we’ve reached a decision based on market research that will require us to shift the date back by about 18 days, into July.

Yes, we’re sorry for getting you excited a bit early. This is partly why we are often so quiet about announcing things in advance - a hundred decisions are made every day and often change as new information comes to light.

This decision is entirely based off of expected performance of our launch in such close proximity to the upcoming Steam sale that begins toward the end of June.

It is incredibly important to us, and in the best interest of the game, to have the best launch as possible for the Fall of Everlife expansion and B2P transition. In order to achieve this, we have decided it is best to wait until about two weeks after the Steam sale is over. During this time, we will have a little extra buffer to continue to scrub out the last bugs and polish the client as much we can.

The release date for the Fall of Everlife DLC and B2P transitions is now set for July 18th.

Structure of the new DLC

To begin with, we will be releasing a new DLC every two months where half of the cards within the DLC become unlocked in the second month. The goal here is to keep the game constantly fresh with monthly content while not asking people to have to pay every single month.

We are pursuing this model for the first two sets of DLC but are not entirely committed to using it further until we are able to observe the results and gather feedback.

We’re also still not quite ready to announce the pricing, and the reasons here are very similar to why we’re reluctant to announce things like release dates! In the end, the goal is to have our DLC be as reasonably priced as possible so as many people can enjoy it as possible.

With the release date shifted back a couple weeks, this throws off our previous plans for the Fall of Everlife invitational - as next month we will be running our $2500 FWC Seasonal Cup for the Season of Ruunin as well.

Here is how we’re going to handle that.

We recognize this will be a slightly odd month with how our normal official tournaments are scheduled, but we believe with this arrangement we can make the most of our Fall of Everlife promotion and be as fair as possible to our competitive players.

Register your decks in game and make sure to sign up on Battlefy. Keep an eye on Twitch channels where you can win prizes!

Will it Work? - Aquablad tries experimental decks and throws them wildly at his opponents’ face.

Matrien’s Midnight Memes - Warning, use at your own risk.