##The next Adventure Pouch Reveal

It didn’t take you very long, yet again.

Earlier today, you already completed gathering 175,000,000 Gold and have unlocked the first reveal of three for the upcoming Adventure Pouch.

You may already have an idea of what the hint would be as more letters were exposed, but now that it’s fully revealed, let’s get a little more specific.

The revealed hint is as follows:

"I am a god’s lost memory. You will soon find thirty more of me."

In Faeria, you play as a god fighting to regain your lost memory, known as memoria. Some of that regained memory manifests itself as the cards you earn and then subsequently play. You’ve got it - this hint means that in the Adventure Pouch: Oversky expansion, we will introduce 30 new cards into the game.

Those 30 new cards will be obtainable from the upcoming co-op campaign that will consist of 6 quests packs. This campaign will be unlockable with in-game gold or gems, but you don’t have to do that - it is entirely included in the Supporter’s Adventure Pouch!

The 30 brand new cards will be expanding on the existing strategical elements in Faeria as well as introduce new and exciting mechanics. We will be revealing those new cards as we go and, needless to say, we’re very excited. We hope you are too.

Those of you who purchased the Supporter’s Adventure Pouch for the exclusive full cosmetic set of “Fugoro the Adventurer” - here is what you’ll be getting: 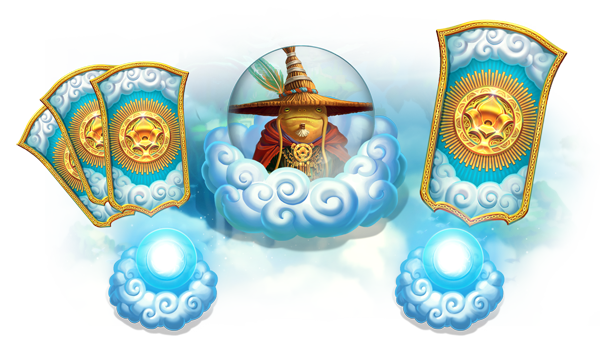 Nice clouds! Fugoro has to get to the Oversky somehow, right?

With that out of the way, it’s time we dive head first into the next reveal.

Think you’re so good at gathering gold? Okay then. This time around, you will need to gather 300,000,000 Gold to reach the necessary milestone and unlock new content!

Get the Adventure Pouch today!

The current Ranked ladder and Pandora season ends on Monday, April 3rd. Fight your way to the top to earn the following card backs!

Now that we are out of Early Access and Mythic Chests are available, we have revamped the way seasonal Ranked rewards work. 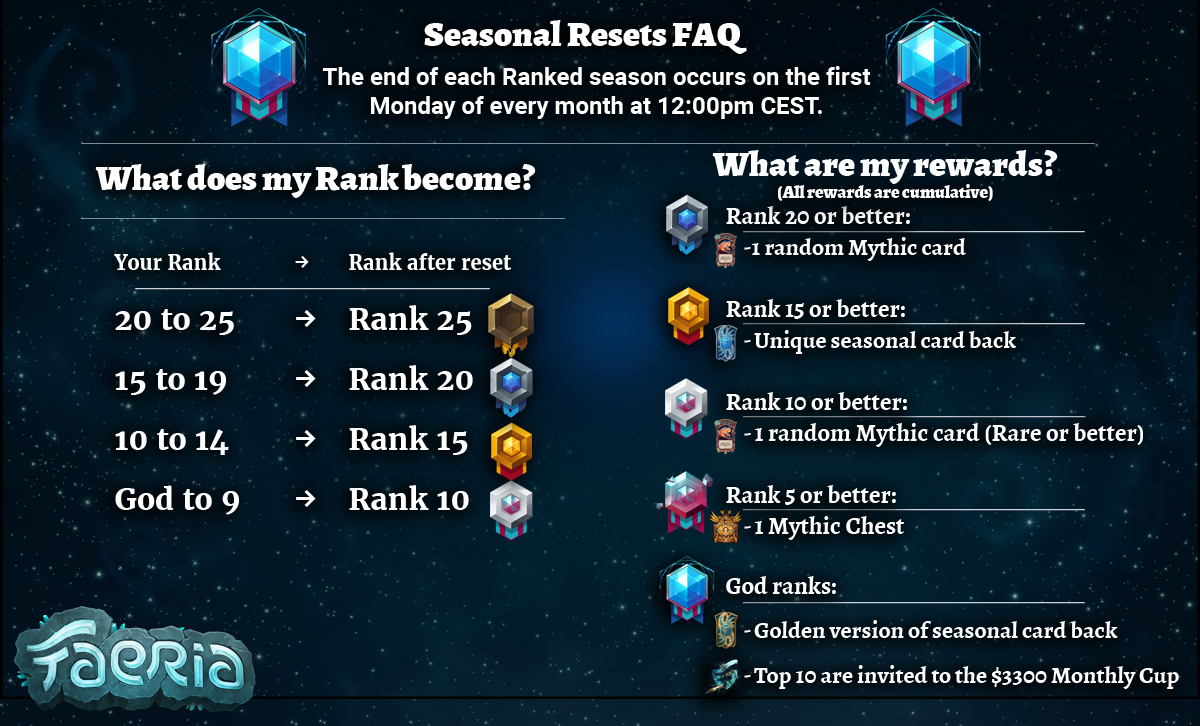 The previous reward system had milestones only at 20, 15, and God. Now we’ve made it so there are cumulative rewards every league, starting at 20. This should help provide incentive to make it into each league, not just three of them. We’ve also replaced the Pandora coin rewards (which were placeholder incentives during Early Access) with Mythic rewards - something that all players can benefit from, not just those that enjoy playing Pandora.

Make it all the way to God rank to win everything you see:

Click here to see how Pandora season rewards work, which have not changed.

We’re very aware of the crashing problems some users are experiencing in the iPad version and are working hard at addressing these issues. We’ll have more to announce on this soon, but know that your bug reports and support tickets are not going unheard. Thank you for your patience.

We’re looking for any writers out there who would like to share some thoughts or special pieces on the Article section of The Hub.

Examples of pieces that belong there:

If you have interest in this sort of thing, please contact Atmaz or Aqua “Boss Hawg” Blad in our Discord channel, and we can walk you through the process. Currently, Article creation is a unique submission type and requires special approval.

It’s going to be our goal to rotate the items in the shop each Friday from now on, and present them to you here on Faeria Friday. If you see something you like in these deals, make sure to get them before next Friday!

The new Deals of the Week:

Will this be your first Faeria tournament?

Remember, you will be able to watch the qualifiers live on Twitch, with community commentary.

###Battle of the Gods VODS

Battle of the Gods invited the Top 10 Gods of February to compete in a special tournament. This tournament was streamed live during our Adventure Pouch announcement.

Have a fun Sunday with Faeria on Twitch.tv! Interact with the community and hang out with Scream112 on MetagamingTV. During the stream you’ll be able to enter raffles to have a chance to spin Krog’s Wheel of Treasures.

Win treasures such as:

March cardback? I want the one from the banner of the announcement post “change png to mp3” lol?

Where can I get that?

By pre-ordering the Adventure Pouch

Go to the link you just posted, change the png at the end of the link to mp3, then download the link and plug it into a mp3 online reverse website and then download that mp3. The result will be an audio clip of someone saying what sounds like “the Earth greets you.”

[EDIT] Also, that card back is for people who preorder the expansion, I forget which bundle has it xD

March cardback? I want the one from the banner of the announcement post “change png to mp3” lol?

Where can I get that?

That is indeed the exclusive card back from the pre-order, which you can get right here if you’d like.

And yes ok people I got it, it’s from the pre-order

HAHA, I think Atmaz actually posted about your specific question before I put my edit in xD sorry @Atmaz

Seriously? You had to nerf the end season rewards too?

Even if you refused to play Pandora, 3 coins used to net you 3 Chests + 2400 Gold. And If you liked playing Pandora it could get you a whole lot more … But now you get 1 mythic card instead? 2 if you try hard enough.

In pre-release Faeria was actually FTP, I even spent money and highly recommended it to others, but not anymore. Every single change you’ve made since release has been designed to prevent FTP players from achieving full collections. It’s kind of disgusting.

I’ll continue to play for a while since it’s a good game, and I already managed to get most of a complete collection before you came in with the Stingy Hammer, but the perpetual greed displayed since release doesn’t deserve another cent from me. And it’s a pretty lousy way to grow your player base.

I dont necessarily agree with you but I kinda have to agree that the rewards feel a bit lackluster.
A random mythic card is imho worse than getting a chest. I probably got more than 1 mythic getting to my current rank. And for the time I spent trying to climb the ladder I feel like the rewards should be better.
Reaching rank 15 and getting a random mythic card feels unsatisfying, although the seasonal cardback is quite cool.

So, I really hate that announcements like the Season Rewards are not announced in advance. I joined the game just after release, and I’ve allocated my in-game time these past three week at least in part based on the various rewards available. Now you are effectively retroactively changing the rewards, so that I should have been allocating my time differently these past 3 weeks. I strongly suggest you consider announcing new season rewards before the beginning of the season they will apply to, instead of near the end of the season. Otherwise you risk alienating users that would have been able to adapt their game-play with more notice.

Yeah, I was looking forward to my pandora coin from reaching rank 19.

Mythic card is nice but I would rather have battle chest, or even plain gold. Don’t really care about cosmetics, a choice would have been nice.

It’s not all bad, at least I can disenchant the mythic card…

It’s disappointing that you nerfed the season rewards so much. The pandora coins helped improve your collection more even if you just ended your run immediately with them. The mythic chest is decent, but two mythic cards is low for something you only get once per month.

The new seasonal rewards are close to being on par with what you get in Hearthstone. It’s a shame that the rewards are becoming more similar to Hearthstone’s, after Faeria was advertised as being more generous than Hearthstone.

The rewards are really skewed towards pandora too. It would be better if there was equally much incentive to play ranked as there is to play pandora, but you get far more regular and seasonal rewards for playing pandora.

Is the average disenchantment value for a random Battle Chest not almost identical to that of a random Mythic Card?

I guess it depends on whether the rarity is skewed to make up for the guaranteed Rare in a Battle Chest, but most Battle Chests seem to have more than one Rare, so it can’t be that significant.

That said, it’s obviously a bigger step down from the Rank 15 and God rewards and I’m not surprised to see people upset by the change, despite the fact it was always clearly marked as a placeholder reward system. I tend to agree that implementing another thing to turn off new players is probably going to hurt the game in the long run.

The disenchantment value is about the same, but there’s a much higher chance of getting cards you don’t already have from a battle chest. It’s more efficient to get missing cards from chests than it is to craft them directly. So a battle chest will likely improve a collection more than a mythic card, especially for new players who are missing a lot of cards.

To be fair, I don’t think new players will make it far up the ladder. But I do agree.
If they center the rewards around visual stuff I think they should give out a special avatar, or orb based on your ranking. Or maybe have the player chose a card he owns that becomes mythic, so you could eventually mythify your favourite deck.

For a new player like me these ‘new’ rewards are not so cool. A pandora coin has way more value for me than a mythic card. The argument that mythic card are something that all players can benefit from doesn’t hold up, since you can just retire the pandora run and grab the gold and chest (like Eggr said). The gap between new and old players (who got the old rewards and the possibility to buy all packs for 60 bucks I heard) will only grow…