Faeria Friday: Revenge of the Rakoa

The Rakoans are coming, and they are not happy. We’re also changing over 30 cards next week. Here we go.

With the transition into B2P this summer in Fall of Everlife, one thing we don’t want happening is for those who choose not to purchase the new content to feel at a disadvantage. It’s very important to us that a variety of powerful decks exist across the board, whether limited to DLC or not.

Faeria, by design, has a lot of cards that are not necessarily intended to be extremely competitive. This suits a freemium model just fine, but our philosophy is going to be shifting as we begin to roll out new cards each month. We are extremely averse to creating a “Pay to Win” environment, and that has always been one of the core tenets of Faeria we intend to preserve.

Next week, we will be releasing a balance patch that changes over 30 existing cards in the current library of Faeria. The vast majority of these changes will be buffs.

The goal of this patch is to boost the power level of many cards in the core set which should expand deck-building options all around, in preparation for introducing Fall of Everlife on July 18th. Stay tuned for more info on when this patch will go live.

Driven to anger by the spreading corruption from the befouled Tree of Everlife, the Rakoan tribes have gathered to fight and lay down their lives in order to protect their most sacred lands. 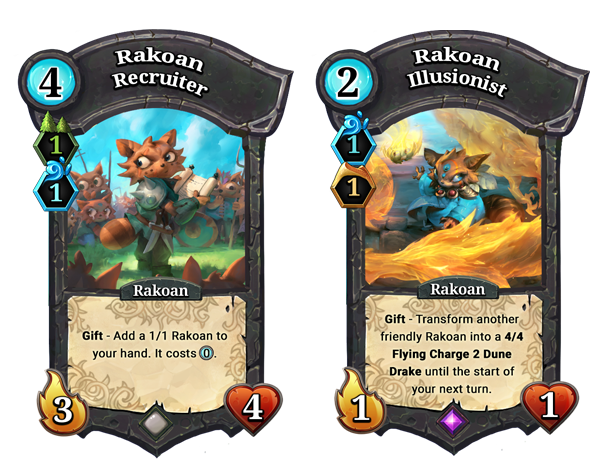 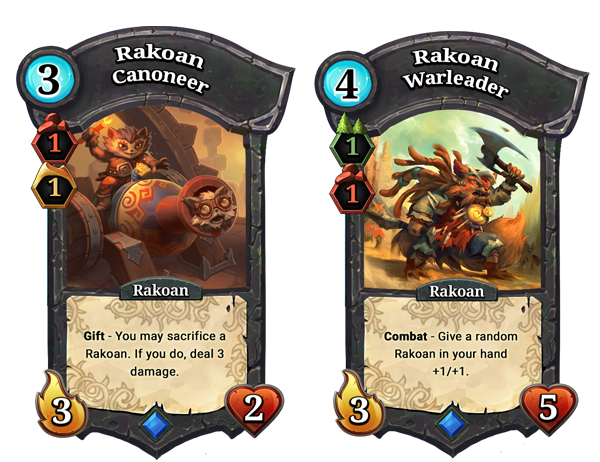 The Rakoan subtype will be part of the Fall of Everlife expansion, and all currently existing Rakoans will gain this subtype.

Rakoans reach their full strength when drawing on all powers of the land, letting them transform or sacrifice other brave Rakoans in the fight against Kaios.

Mechanically, we wanted to give Rakoans a strong team identity. While Yaks run in herds, and other tribes are potentially more solitary, Rakoans always work together for the greater good…even to the point of climbing into a cannon to help the cause - completely willingly!

Since many of the Rakoans want other Rakoans around, it was important that we gave the tribe a few tools to help them survive board-wipes so that one Firestorm doesn’t completely ruin your deck. The already revealed Rakoan Shield Mates demonstrates this philosophy by sticking on the board even when the original body dies. Rakoan Recruiter can survive the worst boardwide effects, while also producing a token you can save and drop for free later when you need to guarantee some cannon fodder.

Rakoan Warleader also has a tough body, and works well with buffing the recruit you are saving in your hand. The Illusionist provides some tricky plays, either offensively to surprise your opponent with a Flying/Charge creature for a beneficial trade, or defensively against board-wipes or 3 attack enemies. It’s important to remember that the illusion only lasts until the start of your next turn, and the returning Rakoan will be transformed back into its previous card, fully healed and buffs removed. The Rakoan Canoneer doesn’t really help with the resilience of your Rakoans, in fact, he might be a little too happy about undermining it!

In case you missed Shield Mates before, here they are with their brand new subtype: 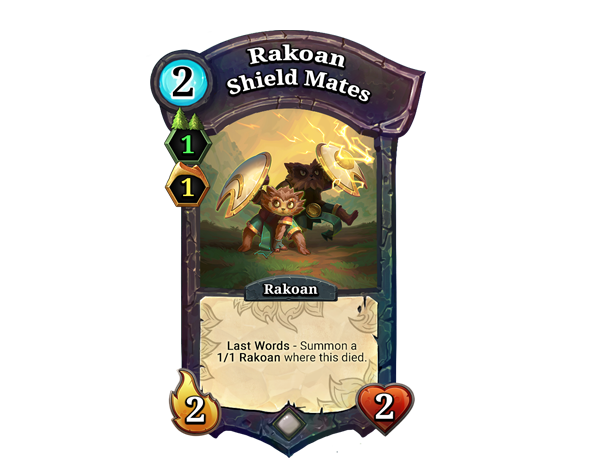 Rakoans, Yaks, and two more yet-to-be-revealed subtypes are coming this summer with Fall of Everlife. Is your body ready?

We’d like to extend our utmost appreciation to Werfs for organizing this great set of tournaments. While Hex Templar will be taking a break for now, don’t be surprised if it pops up again in the future.

Only one more Championship League tournament remains in the season of Ruunin! Last chance to secure those points.

Will it Work? - Aquablad tries experimental decks and throws them wildly at his opponents’ face.

You, too, can become a God. Let Aquablad show you how.