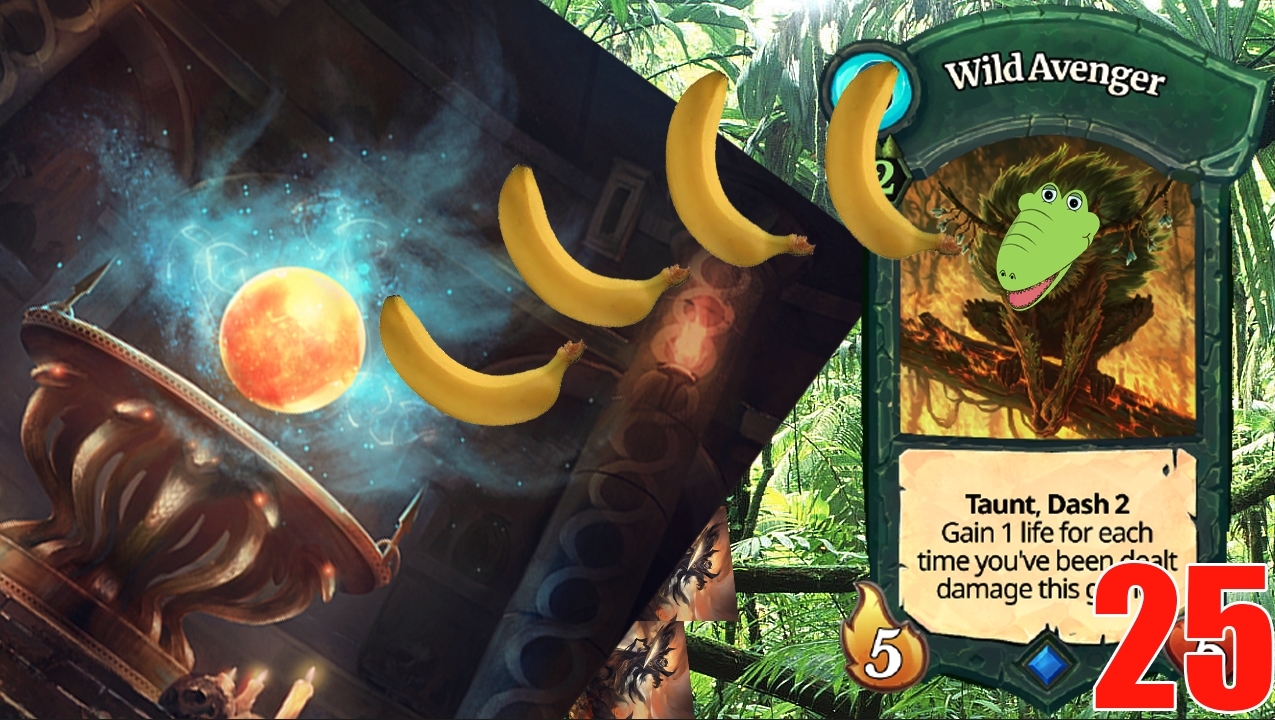 Whalecum, I’m thormond, the minister of memes.
Today we’re gonna learn how use a product from my winter collection: The Crocodile Banana Sacrifice Control.

This deck often breaks conventional rules of faeria (which is to outtrade, outgather and outSMOrc) and aims at winning through scaling value from lategame tech such as Wild Avenger and Radiance (and shadow spam to a decent extent).

Early game is not the strongest but cards like Shaytan Demon and Weeping idol can snowball the game in your favor if your opponent is not answering them directly.

If your opponent decides to dodge Shaytan Demon as long as possible to burn you out, it’s only gonna give you time to get your lategame tech online (mainly radiance), heal up and get insane tempo advantage. You also have an option to trade demon by pushing it with champions/twister if it becomes too much of a liability.
Similarly ignoring weeping idol and going face is gonna have the same effect.

But what if I don’t draw shaytan demon and weeping idol?

That means you drew into other cards which could contain Air Elemental (best opening vs midrange or greed decks), Altar of Souls (good in starting hand vs everything except rush), Khalim (best turn 2 card in the game), Hold the Line (pretty bad early on but it would still do as harvesters/blockers), and a bunch of reactive cards like **Soul Drain, Wind Soldier and Last Nightmare ** (which answer threats directly and extend the game).

That’s 10 out of 30 cards that cannot be utilized early on which makes this deck really consistent for how greedy it is.

You want to get the game to the point when you have either massive faeria advantage (due to opponent trading with your shadows) or having big avengers/cheap radiance (due to playing against red that has answers to shadows and burns your face).
The reason why RY is a bad matchup is because they have efficient answers to shadows/altar of souls and **at the same time ** answer for big wild avengers/radiance (last nightmare).

How not to play

Don’t rush. Don’t midrange (unless your opponent is Modgnik on supertoad). Play to the sides and patiently wait for your lategame tech to kick in.

If you ever played an altar of souls deck you would realise that it has massive problems with getting lands to play creatures and shadows on. Ideally you want to have a high health creature and a shadow on the board at the same time (shadow usually gets removed but protects the other creature from removal so that you can gather).

Air elementals are creating not only lands but due to flying tag they are not occupying any.

Windborne Champions are flying, can help your shadows/demons trade, can make more room to play shadows by pushing opponents (or friendly) creatures from your own deserts and at the same time act as an additional wincon (or a tool that helps you push for wincon). Additionally pushing opponents creatures away buys you time to develop lategame tech.

PS: chargers suck in this deck, it’s been done before

Why is everybody’s avatar on this site a fox? I want a crocodile