Fungoro Solo Quest. Any suggestion for a deck?

Hi, I’m not sure what expect from this quest.
Any suggestion for a deck?
It says I have only one chance to get it and I don’t want to waste it.

well i lost to him countless times, ( 17x atm i guess )
cause i’m force to play against him, have him in all 3 slotz n the game keeps giving me fugoros only.
neither of the 5 colors is doing it for me.
like how my quest-progress moves on anyways… ( 50% mystic, never seen yellow quests else than fugoro challange ) 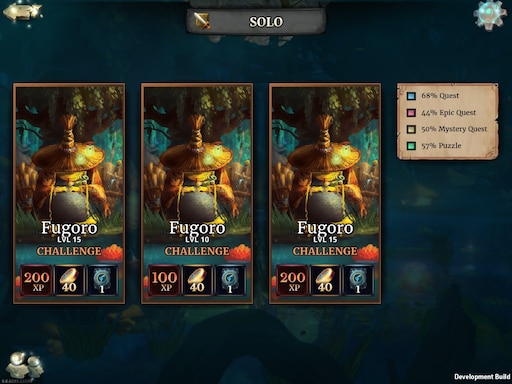 Steam Community: Faeria. gimme sth else!!! 1 lose counted (fugaro) as mysticquest, instant 50% progress (a lose!). outa ~17 confrontations i beat him once. fix it!!!

I used yellow rush for lvl 10 and lvl 15. I think I lost one game total out of like 10+ because very unfortunate draws+land placements too far from orb (which was my bad).
It feels really mind numbing to do it like that but it works, 2x double prairie and then two deserts on one side, allowing to gather+attack him. If you have sagitarius that helps.

He has treasures from Pandora, so If you have not tried it. Do some phantom runs so you get a feeling of the treasures power. There is also a page with all the treasures so you can try to play around them.

Since he has many neutral minions both from treasures and normal ones, it is good to have punishment and falcon dives to remove them.

He seems to usually build defensively at first using “Furtune Hunter” to gather (famine or falcondive to remove). Then he starts to build up along one side to attack you with very strong creatures. Last Nightmare or Frogify are good to counter them.

if you are a new player, I think playing pandora and ranked trying to find a comfortable deck that has high performance and not many “dead hand” states, i.e. you can always do something useful with your cards. Then try to beat him with that deck, you will face him many times losing the first is not the end of the world.
You will get to try to win vs him again, but you will have to complete other quests first.(I am not sure if that “particular” fight is lost like you have max 6 chances totally at lvl 10, 15 or 20).

Thank you two very much for the help

If you haven’t you can always try finding help at Discord. Faeria has it’s own channel, where many good players are active. It is useful for simple questions and deck sharing.

You can find it by clicking your “friends list” (bottom right) and then clicking “Join our Discord channel to stay in touch!”.

I’ve used Red Rush for over 90% of the missions. I’ve completed everything and lost to Fuguro just 2 times because he had the treasures early on and i didn’t draw any neutral cards. If you don’t have that deck a mono blue deck also works if you take 3 Unbound Evolutions and 3 Auroras Creations for the treasures.

I use a red last words/rush deck. I also throw in a few green give taunt or buff cards from green that have actually came around for some nice plays and can gather faeria. He usually has a quick recovery if I go full on aggro. I have only lost twice to him so far and was with a blue deck I made trying to be safe the first time against him. The blue decked worked untill he started spamming pandora cards.

I used this mono green deck in all Fungoro games during my completion of the solo mode. I only lost to him twice. Therefore I’d say the fight is quite fair when you build a deck around it - and I just used my basic mono green deck without doing any changes to it.

As a tip, I’d suggest to be quite aggressive at the beginning. Even though he plays those nasty treasures his start is pretty much always the same and quite slow. If you immediately build neutral lands towards him, and drop early threats like Freedom Fighter and Verduran Force (plus buffs), you should be able to clear his early drops and easily control the game from there. When you have the full control over the board it is easy to react to his treasure powerplays.

A good option that works for me is the red / yellow control and direct damage one.

Using a lot of removals, you’ll be able to slow his attacks while indirectly harming his orb (Blood Singers). Yellow removals are quite useful yet expensive, they can help you to remove a dangerous minion. Some taunts will help to slow him too.

The point is, trying to get Blood Singers as soon as possible and try to avoid the building of lands too close from your own orb. Direct attacks are an option with this kind of decks, but it’s not the main one - you’ll have to protect your life points while controling the board.

For level 10 a red very budget deck works. Some removal, some neutrals with assassin, and lots of cards that deal damage to him on combat and when enemy dies. Also the big red taunts. I am using a solo very budget red deck.

I play a blue deck versus him, a couple of cards i consider to be exceptional against Fungoro lvl 20.

Basically the idea vs lvl 20 fuguro is:
-Early game have a bunch of small minion with enter the battlefield effect (royal guard/ draw 2) gathering faeria for you, bot will waste death syth on ur 1/1s and you’ll be able keep up tempo since you got value from small minions already. you then trade his deathsyth creature for your other 1/1s or falcon dive
-mid game he’ll play really efficient pandora creatures, you just want to trade those for frogify/ unbound evolation 1/1
-Once you survive the early/ mid just control the faeria well and build a advantage until u win. He has some pretty suboptimal creatures that doesn’t play well from behind like lore thief and underground brigand. He also have no real way of dealing with multiple big guys since he’ll usually waste them early on body no bigger than 4/4s.