How to build a Blue deck

Deck construction is an exciting part of card games. It allows you to flex your creativity and experiment with cards you enjoy playing. In this series I will go through each colour and give you a starting point for different types of decks.

Blue is a fascinating colour in Faeria because of how intricately their cards interact with the board. Blue is a colour that rewards decision making and land positioning thanks to their mobility. You have access to cards that can move land, the jump mechanic and transformation effects. However, Blue’s weakness is not having initiative on board. Blue relies on having board control to win and if lost it can be tough to make a comeback.

Blue isn’t known for its rush play-style but it does have cards to support this strategy. Blue has access to some of the most mobile and cost effective creatures in the game. A good card to base a rush strategy around is Snowstorm Lancer. 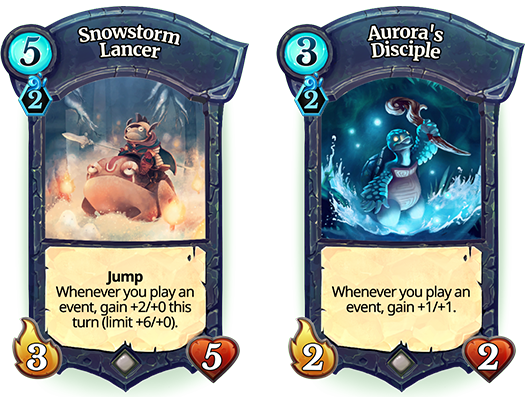 Snowstorm Lancer gains more attack power when you cast an event. He also has Jump making him a very deadly creature. With Snowstorm Lancer at the core of a rush deck you can add a lot of events to support him. Shifting Tide allows you to draw more cards or move your Snowstorm Lancer into a threatening position. Another card that has great event synergy is Aurora’s Disciple. This could be a good starting point if you’re interested in rushing with Blue.

Mid-range Blue has been a very powerful deck in Faeria. The deck takes advantage of Blue’s strong mid-game creatures and combines them with mobility. Cards like Ancient Herald and Tyranax paired with Triton’s Banquet make them powerful early and mid-game threats that can easily control Faeria wells. 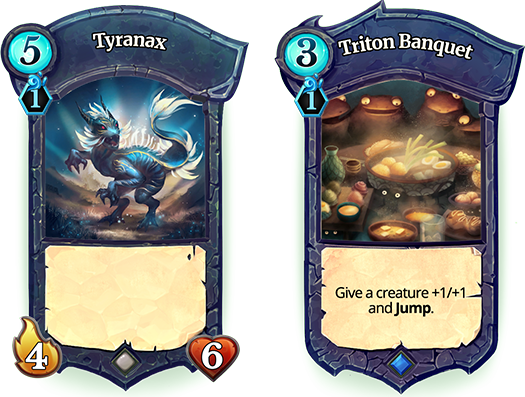 Blue is very good at controlling the wells. Land movement makes your creatures very deadly no matter where they are on the board. Cards like Prophet of the Tides and Sunken Tower give your creatures incredible reach, allowing them to attack foes from across the board.

Control is Blue’s speciality and there are two decks that are very popular among Blue players. The first is Blue Sevens, a deck that uses 7+ cost cards to empower cheaper cards like Gabrian Commander and Gabrian Archon. Blue Seven’s oppresses your enemies with cost efficient creatures and Faeria acceleration through Windfall. The second is Dream Reaver, a control deck that has a combo finisher by using Dream Reaver to set their opponent to 10 life and buffing him with a Gabrian Enchantment for a one turn lethal.

Both these decks have the same game plan, control the board. The difference between them is the win condition. Both decks share key cards in Blue’s control arsenal. 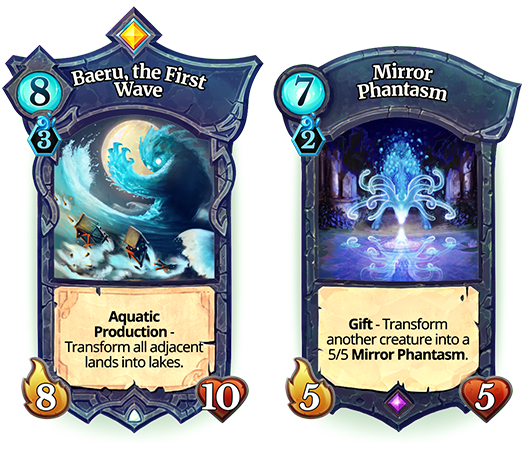 Baeru, the First Wave is Blue’s most powerful card. It has a monstrous 8/10 body with a unique and powerful production ability. Baeru’s durability makes him hard to remove giving colours like Red and Green a hard time.

Mirror Phantasm transforms friend or foe into a 5/5. This is one of Blue’s ‘soft removal’ tools. Since Blue doesn’t have any damage based removal or hard removal they rely on transformation to answer big threats. If you opponent has a 7/14 Primeval Colossus on board then Mirror Phantasm can transform him into a manageable 5/5. Transforming your own creatures is a great way to gain board control against smaller threats. Changing your 2/2 Frog into a 5/5 might be the answer to fending off a rush deck.

Blue is a rewarding colour that offers strong mechanics with a great variety of utility cards. Two ways to become a powerful Blue players is to have good positioning and deck building. Blue has a lot of tools available to respond to a variety of meta-games. If you love a challenge and fine tuned decision-making then Blue might be the colour for you.