How to build a Green deck

Deck construction is an exciting part of card games. It allows you to flex your creativity and experiment with cards you enjoy playing. In this series I will go through each colour and give you a starting point for different types of decks.

Strengths and Weaknesses of Green

Green’s play-style is focused around their large creatures with overwhelming health stats. Green likes to extend the power of these mighty allies with cards that further increase their stats. This gives Green strong staying power on the board. Forest development is very important for Green because their mid-game threats cost between 3-5 Forests. Green also has access to some of the best Taunt creatures in the game allowing the colour to have favourable match-ups against aggressors. However, Green creatures are vulnerable to removal and transform effects. Green needs creatures on board in order to respond to their enemies but cards like Last Nightmare can easily shutdown their large creatures. 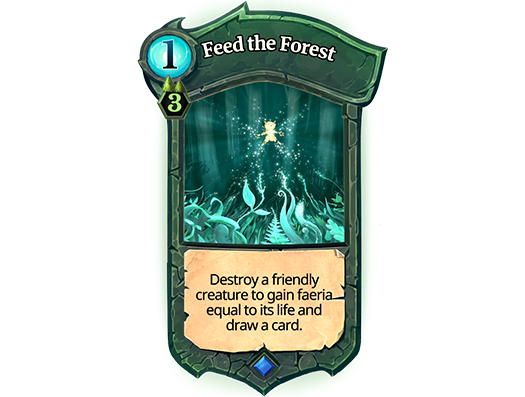 Feed the Forest is an event card that sacrifices a friendly creature and gives you faeria equal to the targets life. You also draw a card. I’ve highlighted this card individually because it is a crucial part of any Green deck. What’s important about Feed the Forest is the faeria advantage you can gain thanks to Green having creatures with enormous health.

Rushing with Green has been built on empowering cheap creatures with event cards like Elderwood Embrace. This makes Green quite unique as a rush deck because it utilises Green’s best economy and power up cards. Oakling and Feed the Forest are a core part of the deck. Which leads to a defensive card like Living Willow being a strong addition because of its synergy with Feed the Forest. Oakling gives a +5/+5 power up when he is destroyed transforming cheap creatures into monsters. 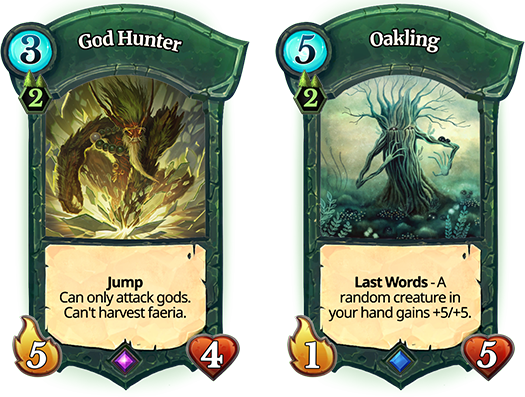 God Hunter is a pure rush card. With power ups and support, this creature can deal a lot of damage very quickly. Its drawback does require good positioning and support from your other creatures. With Green Rush you want to overwhelm your opponent with cheap creatures that have been powered up. Board control can be essential to allow your God Hunter an uncontested run on your opponents Orb.

Green creatures are at their best in the mid-game. Their most powerful creatures come at the cost of requiring a lot of Forest tiles. However, Green has fantastic defensive tools to give you time to setup enough Forests. Living Willow and Wood Elemental are cheap taunt creatures but also fantastic harvesters. Once you get into the 3-5 Forest range then your options become far more powerful. 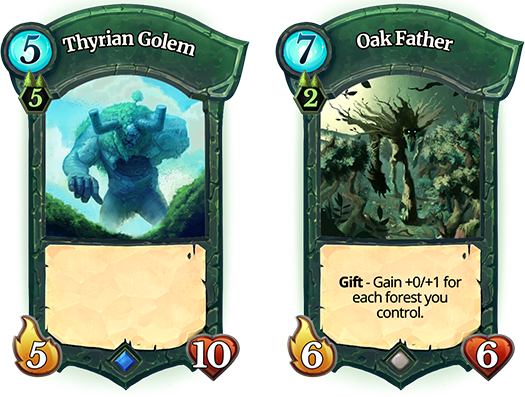 Thyrian Golem is 5/10 creature costing five Faeria and Forests. The Faeria to stats ration is incredible making Thyrian Golem one of the most powerful five cost creatures in the game. Not to mention you can use Feed the Forest on your Golem and gain ten faeria! Another creature that benefits from Forest production is Oak Father. Oak Father benefits greatly from forest generation and can even become more durable that Thyrian Golem with enough forests played.

With all these powerful creatures at your disposal, mid-range wants to control the well spots and out value your opponents in creature combat.

Playing the long game with Control

A core strategy in Green is to empower creatures to overpower your opponent on board. This is no different with Green’s approach to control but it’s a longer process. Green Control decks want to power up creatures on board but in hand as well. This is where Spirit of Rebirth and Eredon shine. 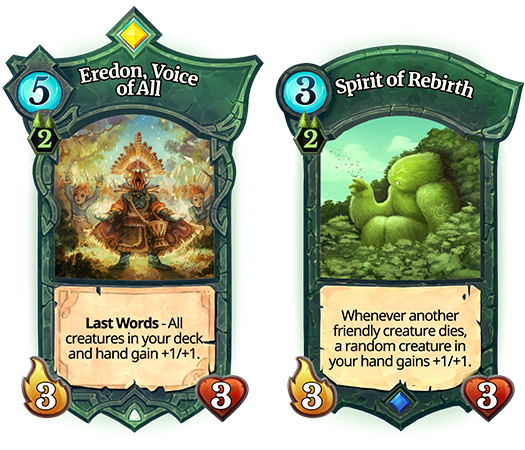 Spirit of Rebirth’s ability extends the powers of your creatures in hand. The longer it stays on the board, the more value you will gain throughout the course of a match. This makes Spirit of Rebirth a great harvester, staying out of danger while collecting Faeria and powering up your creatures in hand. Eredon on the other hand wants to get destroyed as quick as possible. His Last Word ability not only powers up your hand but every card in your deck. This fuels Green Control’s strategy of slowly out valuing their opponents. 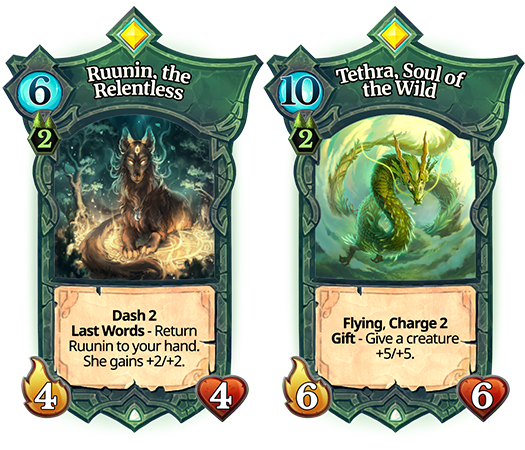 All Control decks need a late game card to tip the tide of a match in their favour. Ruunin is a long term investment that pays off after it has been destroyed a couple of times. Dash 2 allows Ruunin to move into offensive and defensive positions. Tethra is the king of creature power ups. He shares the same stats and mobility as his draconic counterparts but can buff a creature or himself with +5/+5.

Green is a fantastic colour for beginners. Board control, positioning and land placement are key to Green’s victory which makes the colour ideal for learning the game. If you enjoy overwhelming your opponents with super powered creatures then Green is the colour for you.