Today we appreciate your loyalty in patch full of some surprising changes. Read on to find out more.

Today we are releasing what we like to call a Loyalty Patch.

We cannot express enough how much we appreciate the continued support of our players. We wouldn’t be here without you.

This will be the last patch before we enter into B2P and release Faeria’s next expansion, Fall of Everlife, next month.

The Orb of Loyalty

On the home screen you’ll notice a few changes to the links on the right. Most prominently, you’ll see a golden link that will lead you to four brand new puzzles.

These puzzles will introduce three new cards coming in the Fall of Everlife, as well as demonstrate the new keyword: Corrupt.

Complete all three of these puzzles and you will be rewarded with the Orb of Loyalty.

It’s the least we can do. Wear it proudly.

The following three cards are showcased in the puzzles released today. All three will be available in the Fall of Everlife expansion. 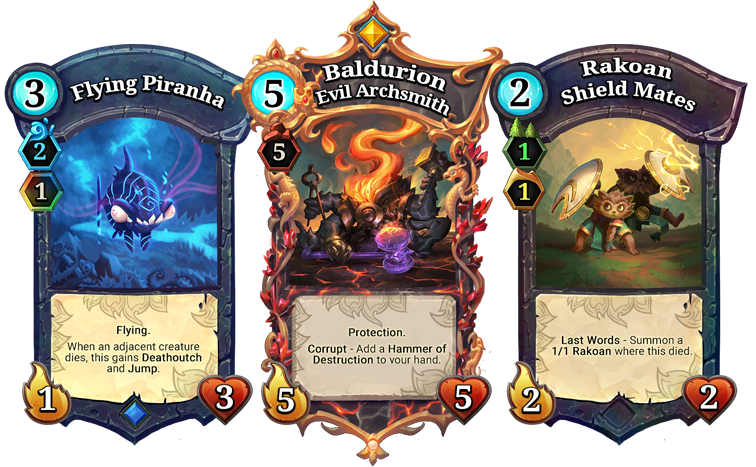 New accounts that are created until Monday, June 4th 9am CEST will receive 1 FREE copy of each of the following Legendary cards:

Why these three particular cards? Well…

While developing new card technology for Fall of Everlife, we created a way to add cards to your hand that have their land requirements completely converted to Wild. Cards that take advantage of this will use the new phrase: “It becomes Wild.”

We decided we could apply this technology to a few existing cards - and so we did.

When adding this new flexibility to Magda, we recognized she was dramatically boosted in power. We’ve lowered her Legend discount and added a Wild cost to her to prevent an early Magda play from dominating the game unchecked. Day of Dragons has received a similar adjustment by slightly lowering its discount. It should be noted that these three cards will be locked from disenchanting due to the free card giveaway, and will remain that way through the upcoming transition to B2P.

We mentioned earlier that we were keeping an eye on decks that specialize in focusing extreme amounts of burst damage to the face using Path to Paradise and Rakoan Chieftain. After further observation and discussion, we are convinced a change is necessary. While this deck style is typically only seen at high levels of play, we do feel it creates too many situations where the opponent is relatively helpless, and does not promote gameplay we believe is healthy for the game.

Unfortunately, with today’s patch we will officially be ending our support for mobile platforms. We’ve discussed our reasons for this in more detail back in March, but know this may still come as a surprise for some players. As we gear up for B2P and Fall of Everlife this month, we are focusing entirely on our PC versions.

In closing, thank you for your continued loyalty! We hope you enjoy today’s new content and mechanics. See you next month in Fall of Everlife.

Hi, thanks for the recent patch, but i must say that some cards in the game aren’t translated into spanish (the language i play), and that all the new cards in the new puzzles don’t have the translation either, so please do something about it!, i can even translate them for you if you want, i just don’t want to be doing that while in game, and also it doesn’t look right for the game and everyone else that doesn’t know english. Thanks!.

P.s: The new puzzles’s description also isn’t translated… not the proper way to introduce someone to a new game mechanic if that person can’t understand what it does.

I knew it was only a matter of time before you discontinued the mobile version. Still, I’m unhappy to see it come. I hope you will reconsider at a future time.

They said after they solidified the pc platform, so maybe wait for it at 2019-20

Wait so whoa hold up there…so…that means i can play ruunin in mono red? But only if i get lucky and magda poops ruunin out and not doomgate?..nerf magda abrakam magda opie.

No seriously does that mean that every deck that goes 4 lands and higher will include magda now? Because if you dont and your opponent does and they get garudan or aurora you lose?

As mentionned by _Ari, there are a lot of translation problems, i believe in every languages. I’m also willing to edit any file that would be given to me for french translation if needed btw.

But the most problematic in my opinion are cards that are not up to date in their text, even in english (Volcanic colossus is what comes to my mind right now, i can try to find others). I do believe that as long as the “non translated” cards are in english, it won’t be a big problem (though searching for specific terms like “wild”, “Sprint”, … can be confusing at first, but anyway most guides are in english so anyone that had a few reading will be OK). However, cards that do not have the effect written on them … that’s a different story (not to mention wiki and such are not up to date due to how few people are in the community). If relevant information is hard to find online, the in-game information has to be proper.

Since you’re going B2P, it might be a really good idea to change this ASAP, because people might try to rush testing the game before that, and cards are the first impression they will have of the game. Remember that you will have a LOT less people willing to test the game as soon as it goes B2P, so the few that are already playing it must be able to show a “finite” product (at least for the content already displayed). Thus, it won’t matter if the game is beautiful/well designed and such, because they will stop at “Changing the text of a card is easy and takes a few seconds. If they don’t even do this, do they do the rest properly ?”. And this would be a shame, because the game is great and you definitely are doing a lot to make it live.

Maybe this is already done and planned for Fall of Everlife ?

There also seem to be a lot of crashes with this error since yesterday’s update (i personnaly had this twice or thrice in the evening and this image is taken from a reddit post of someone else) : https://i.redditmedia.com/5dRPZXWIq_PUfSu19HHggZ10fnwm_AFqCDeKFwFezm0.png?w=1024&s=07c1152ae9a78c75a370351ebd2d9b24

My experience of the game being very short, i can’t comment on the rest of the content yet (though i still have a few insights for being a heavy MTG player and knowing a few other TDGs/CCGs).

Hey all,
supporting what the boys says about the proper translation of new cards to the language in which we are playing, I have also been suffering after the update so many crashes as described by Tinaby,
I would appreciate that this was resolved to continue enjoying this great game. Regards.

Hi! I was wondering, in case we already have the mentioned cards that we get for free (Day of the dragons and the other 2), do we receive free dust for them or do we get nothing? I am trying to figure out whether I should disenchant them or not.

You will not receive them if you own them already and then disenchant them!