For the past two weeks you have been sharing your awesome ideas for the decks with us and now it is time to conclude what ideas are the best. However, before we jump into the results let’s look closely at [Card=133]Soulbound Sagami[/Card], the card that contestants had to build a deck around. 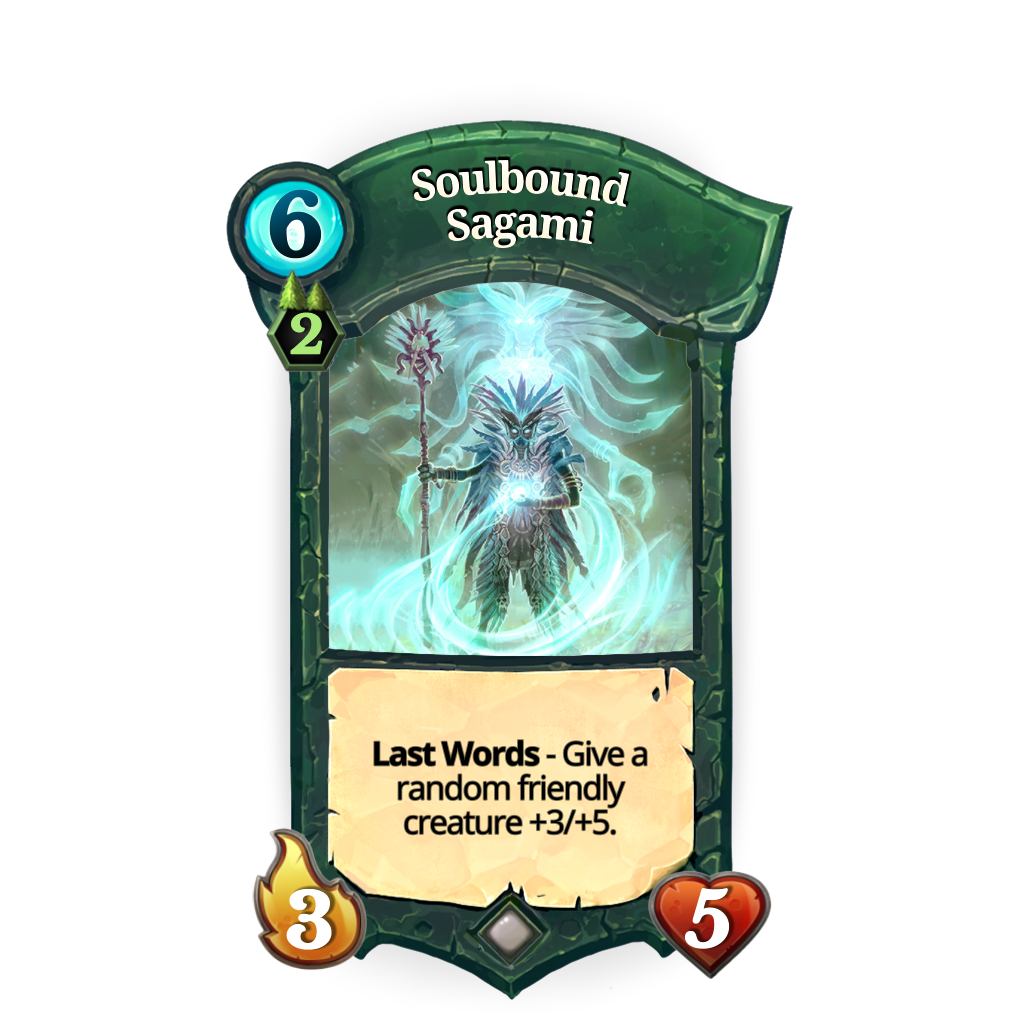 These downsides explain why [Card=133]Soulbound Sagami[/Card] does not see competetive play. No surprise that 6 faeria 2 land requitements card with 8 faeria worth stats has that many flaws. However, if we build our deck carefully taking into consideration these downsides we can gain full value from this card. First, here are the best creatures to have to ensure that [Card=133]Soulbound Sagami[/Card]'s Last Words effect triggers:

This is not the end of the list but these are probably the best options. Now let’s look at cards that could make the best use of [Card=133]Soulbound Sagami[/Card]‘s buff. Before we do it, answer the question: what is better, [Card=175]Elderwood Embrace[/Card] on [Card=170]Wood Elemental[/Card] or on [Card=131]Sagami Warrior[/Card]? If you’ve answered [Card=170]Wood Elemental[/Card], you won, take a cookie! Of course it depends on these creatures’ positioning and whether they could efficiently trade with the enemy creature but in general a buff on a creature with Taunt or any other keyword or ability is better that on a creature with no abilities. With this idea in mind let’s look at creatures and keywords that could make the best use of buffs and especially [Card=133]Soulbound Sagami[/Card]'s buff.

Well there are a lot of great buff targets but listing them all may take too much time. Anyway, there’s still other notable cards that may be come in handy in a Sagami deck.

Divine rush made by Eshi is a deck that focused on throwing all the buffs on Divine Guardians. Once you manage to place a buffed Guardian near your opponent’s face it’s probably impossible for your opponent to defend. For this unique idea Eshi recieves 2500 gold, well done!

Unsung heroes by Aasgier has a very nice buff synergy with [Card=39]Unlikely Heroes[/Card] and [Card=43]Sharra[/Card]. Oath of Shaytan is a somewhat crazy yet interesting [Card=302]Monstrosity[/Card] deck. Hunger Games by dDuh is a clean and fine-tuned GB deck with an impressive deck description, nice work!

Thank you everyone for sharing your awesome ideas! Watch Luuu90’s Metashaker #4 deck submissions review to take a look at some other submissions as well and to know what he thinks about them.

See you later! We are taking a short break for now. We will come back later when the new cards will be released or more of them will be revealed. Check the news on the Hub or offical Faeria discord #tournaments channel for the Metashaker deckbuilding contest #5!

It was a great experience for me. Thanks for the contest.
Congratulations to the winners!