For the past two weeks you have been sharing your awesome ideas for the decks with us. Now the time has come to conclude which ideas are the best.

This time the task was to make use of Triton Banquet and Triton Chef — the cards that do not see much play on the ladder and competetive scene. We will start by analyzing the cards and then provide a few deck examples — our Metashaker finalists! Alright, let’s begin! 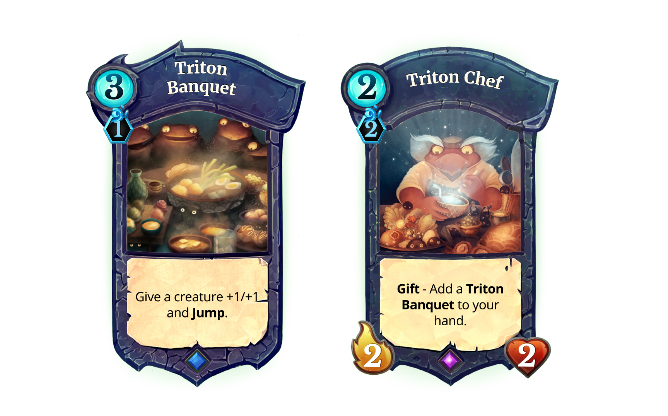 One of the main reasons why Triton Banquet does not see much play is relatively high cost. If you compare the cards with the popular mobility tricks like [Card=293]Flash Wind[/Card], [Card=268]Khalims Training[/Card], [Card=4]Syland Horsemaster[/Card] and [Card=120]Shifting Tide[/Card], you can see that the “mobility” part of these cards cost no more than 1 faeria whereas Banquet’s jump costs 2 faeria. That is too much for a mobility trick. One might argue that jump is much better than charge but in most situations there is no need to jump over creatures or ocean tiles and charge is more than enough to move your creature to the desired position.

No matter how you look at it, Triton Banquet seems to be a bad mobility trick. But wait, is it a mobility trick at all? What makes this card special is that the jump ability given to the target is permanent. It means that you can gain much more value if your creature keeps being alive double harvesting. Whereas tricks like Flash Wind are often used on cheap creatures like [Card=63]Outland Ranger[/Card] to trade with enemy creatures and die, you can’t do the same using Triton Banquet. Well, you actually can but it would be too expensive and probably not worth it. However, if you use it on a big creature like [Card=74]Tyranax[/Card] that will stay alive after trading, you will be left with a scary creature with jump in an agressive position forcing your opponent to fall back.

Another example of a permanent mobility buff would be [Card=268]Khalims Training[/Card]. However, there are a few differences. First, the +1 health buff from Triton Banquet really helps the target to stay alive. Second, Training is a yellow card with 2 desert requirement and yellow creatures mostly have low amount of health. Blue, on the other hand, has a good amount of sturdy creatures. Also, the Banquet’s low land requirement allows you to splash it to green or red where you can find even better buff targets.

To sum it up, in order to use Triton Banquet most efficiently you need to use it on creatures that can stay alive as long as possible. Creatures like [Card=74]Tyranax[/Card] and [Card=123]Ancient Herald[/Card] are great examples of sturdy creatures especially because they share the land requirement with Banquet. Most of the green creatures are healthy and thus are great targets as well and from red you could take combat creatures like [Card=195]Underground Boss[/Card], [Card=211]Shedim Brute[/Card], [Card=516]Cap-10[/Card] and [Card=202]Seifer[/Card]. [Card=102]Auroras Disciple[/Card], [Card=186]Seedling[/Card] and [Card=132]Bone Collector[/Card] deserve a special mention for several reasons. First, they can keep growing after they trade and keep staying alive. Second, such creatures tend to stay back in a safe place at first so they need a surprise mobility trick to go into the fray. Lastly, since we need big creatures for our Triton Banquets our deck might lack opening creatures; Seedling, Disiple and Bone Collector are good options because they are cheap harvesters that can grow big later and become great buff targets.

And a few words about Triton Chef. You should use it when your deck is running too low on opening creatures or simply has too many events and too few creatures. Similarly to [Card=63]Outland Ranger[/Card] in Yellow Events, the deck is focused on event synergy and tries to have as many cheap events as possible so naturally it doesn’t have too many creatures. Outland Ranger saves the day!

Now we proceed to the contest results! Meet the Metashaker #11 finalists!

BG Enchatment decks are able to create big and faeria-efficient creatures but they usually struggle to take them into combat. In the deck made by ronolulu this problem is solved by adding Triton Banquet to the deck. Enchanted sturdy creatures are one of the best Banquet targets. This card is especially good in this kind of deck because it starts off playing defensively and switches to attack as soon as it has an established board with a couple of creatures with an enchantment in the hand. Mobility given by Triton Banquet and Shifting Tide is a big help. [Card=144]Possesed Ursus[/Card] is not only yet another sturdy creature in the deck but it can also become a massive threat to the opponent orb. The variety of mobility in this deck will force your opponent to deal with Ursus as soon as possible even if he can only do that inefficiently. 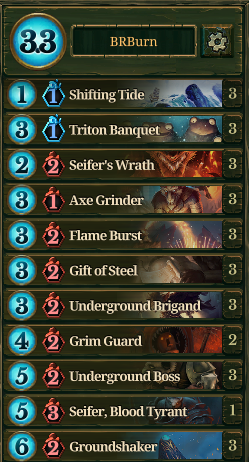 After the [Card=4]Syland Horsemaster[/Card] nerf red combat might want to find alternatives. This BR deck made by Sulphur makes use of blue 1 land requirement mobility tricks to take the opponent by surprise. Combat creatures are one of the best targets for Triton Banquet and with the extra movement from Shfting Tide you can make the most valuable trades. The blue part of the deck consists entirely of events making your land development quiet convinient. Keep controling the board and finish the game with burn damage.

When you see your opponent opening with double neutral followed by Maceman what do you expect this deck to be? You might think it is green rush or red rush, maybe yellow rush if it still was a BG ramp meta. But you would never expect Maceman buffed with Triton Banquet jumping over at you. This neutral blue rush deck made by shiho will catch your opponent off-guard with its unexpected twist! This deck is full of sturdy creatures that could make use of Triton Banquet. Most of them have 5 health or more synergizing very well with Ancient Herald. The land requirement of only 1 lake is very convinient for a rush deck giving you access to any of your ar any moment even when you still haven’t developed a single special land. Jump ability together with Shifting Tide is especially good in rush because it makes it incredibly difficult for your opponent to bodyblock and protect his orb.

Thank you everyone for sharing your awesome ideas! Watch Luuu90’s first impression video where he looks at the submissions and analyzes them.

That’s it for now. See you later! Check the news on the Hub or offical Faeria discord #community-announcements channel if you don’t want to miss next Metashaker!