Last week you have been sharing your awesome ideas for the decks with us and now it is time to conclude what ideas are the best. Everybody was experimenting with the new Oversky cards and it was indeed a hard task to impress the judges. In the end what are the most original decks of Oversky week #4? 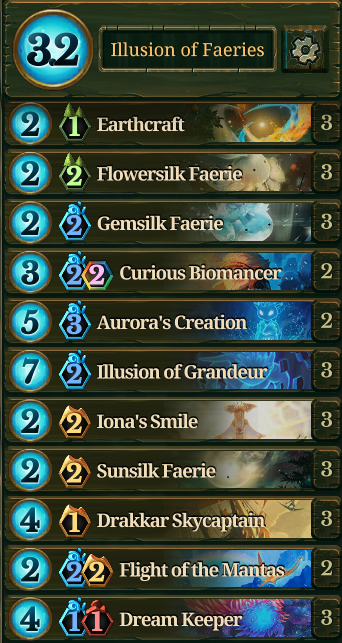 The first deck is a GYB combo deck made by Verity which features Dream Keeper and Curious Biomancer. This deck is packed with tons of little interactions that result in an exploding combo! 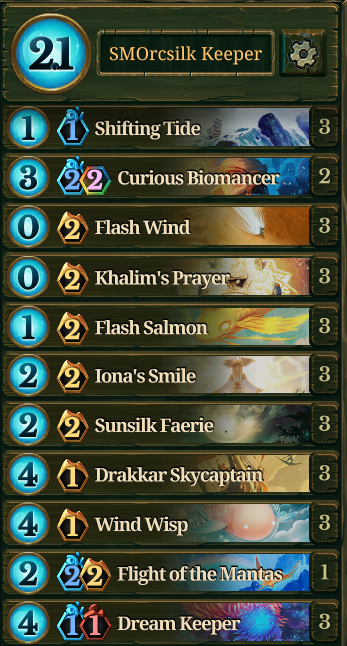 The second deck made by onnig90 and this is another Skycaptain Dream Keeper deck. However, the approach is quite different — whereas the first deck tries to sit back, this one goes straight to the opponent orb. Using Sunsilk Faerie and Wind Wisp charge 3 with the help of blue and yellow mobility in the form of Flash Wind and Shifting Tide, this deck tries to damage the opponent’s face. Flash Salmon’s haste makes it a great creature to be buffed by Skycaptain, especially when buffed buffed several times by shuffling it back with Dream Keeper. Another cool thing is that this deck is capable of triggering Khalim’s Prayer very consitently — if you don’t have it in your hand just use Dream Keeper to draw for it! You could even use Flash Salmon before shuffling if you currently don’t have any creature ready to strike the orb. Neat!

The last deck is a BY Control deck made by ArdentEspio that features Emperor Kaios and Curious Biomancer. If you survive long enough to play either Kaios or Curious Biomancer followed by Kaios then you will be im a good spot for several reasons. Kaios’s production ability gives -1/-0 to all enemy creature and kills those who have 0 attack. By using Frogify, Humbling Vision and Emperor’s Command you may kill desired enemy creatures more quickly with the Emperor’s ability while also protecting him. Azarai plus Kaios combo may result in a massive board clear! Both of them are also great targets for Aurora’s Creation. If something goes wrong Windstorm Colossus may help you out to finish the game.

Thank you everyone for sharing your awesome ideas! Watch Luuu90’s Metashaker #8 deck submissions review to take a look at some other submissions as well and to know what he thinks about them.

This was the last contest from the Oversky series. After having four weeks of contests in a row it’s time to have a small break. See you soon! Check the news on the Hub or offical Faeria discord #tournaments channel if you don’t want to miss next Metashaker!