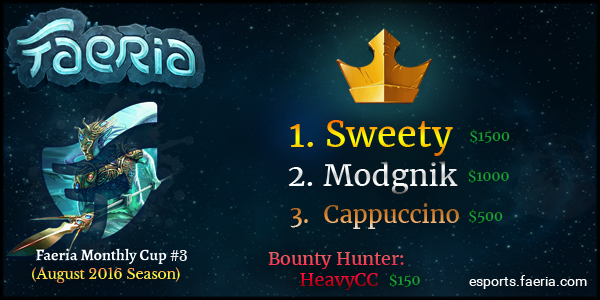 If you missed the Monthly Cup last Saturday, you missed quite a show. With close to 1500 viewers across all streams, there was an impressive scramble of activity.

After several incredibly close series of matches, Sweety takes his second Monthly Cup championship! If you’ve been keeping track, Sweety has now placed in the Top 3 of every Monthly Cup. It’s safe to say at this point that he’s pretty good. He’ll be invited along with Modgnik to the next Monthly Cup, taking place Saturday, October 8th. Cappuccino also made his Monthly Cup placement debut, and one bounty from a previous champion was claimed by HeavyCC, who defeated Gravekper and took fourth place.

You can view the full completed brackets here.

During the stream, thousands of prizes were given away, and thousands of Eggs were hatched. If you didn’t get one - don’t worry. We’re not only planning on making the Eggs return for each Monthly Cup, but we’re looking at ways to provide more opportunities for you to earn them throughout the month. Stay tuned for more information.

You can watch the entire tournament here on our Twitch.tv channel: