What happens exactly when there are multiple bloodstone golems on board?

Two or more active bloodstone golems lead to an interesting mechanic
that can be very frustrating to lose to if you aren’t exactly aware of what happens.

I bring this up because of a screenshot that
was shared on discord recently. 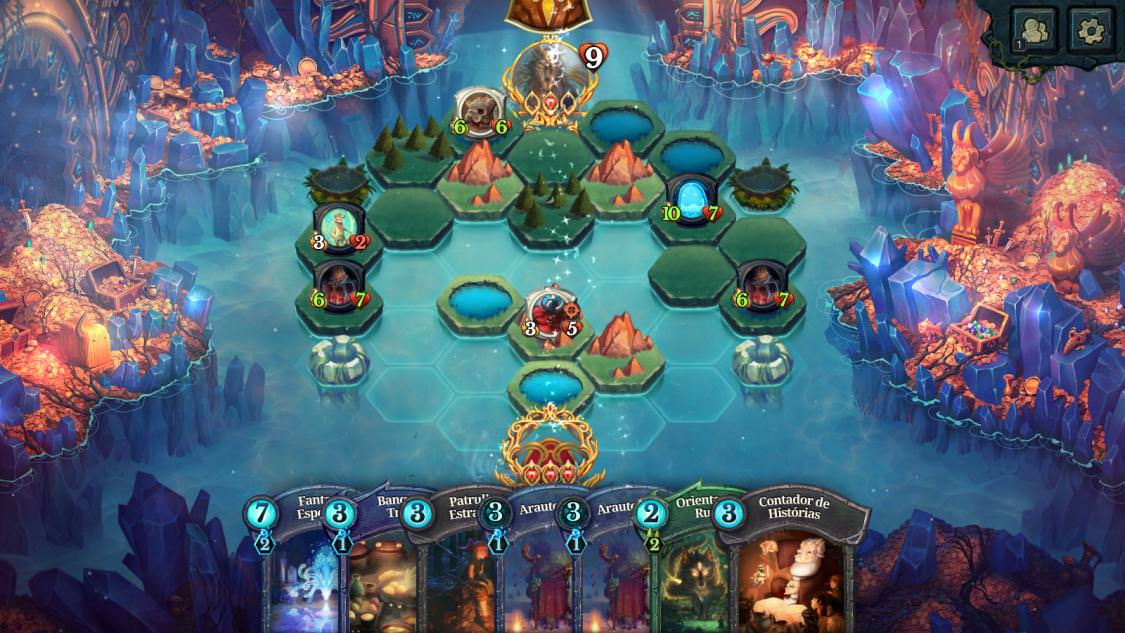 This is immediately after the opponent’s production, dying to the damage from the golems.

We are told the player had 17 life.

So he blames it on a bug.

For those already familiar with Bloodstone Golem, we know he should have only been
dealt 16 damage from looking at the screenshot (I will explain why and how this is calculated).

The issue is, if he insists that he had 17 life… why did he die?

First I will explain how this card works.

Let’s start by reading its effect.

Production - Create 1F in each well.

Whenever faeria is harvested, deal 1 damage to your opponent.

All production effects occur, but not at the same time.
It happens sequentially, starting with the creature on the top-left of the board (from your perspective) to the bottom right.

So if there are two golems, the wells will be refilled twice, and a creature adjacent to a well will collect both times it is refilled.

All this happens during the production phase of your turn. It happens before you can use the wheel and/or move or attack with a creature.

Because there have been reports of more damage being dealt than expected,
such as in the screenshot in question,
it leads some players to believe there is a bug or infinite loop.

This is NOT the case.

Here are some in-game examples, tested in single-player pandora.

Here I have two golems, each adjacent to their own well.

How much damage do I deal?

Again, the top-left most creature’s production happens first. You can see the left golem refilling the wells first.

Then each creature collects, and because I have two golems, each collection will deal 2 damage.

Next the right golem’s production happens, and we collect and deal damage again. Dealing 8 in total.

What is a simple equation so I can calculate the damage in any scenario? (any number of golems, and any number of collections)?

This equation applies only to the production phase.

Example 3 (similar to the screenshot)

So the question still stands, he had 17 life, why did he die?

Let’s take a look at this.
In the beginning we have 2 Golems, 3 collections. As expected we deal 12 damage.
What is important is the uncollected faeria afterwards in the bottom-right well.

In the following production phase, this uncollected faeria is collected first, before the first golem refills the wells.

So back to the screenshot.
What happened?
My guess is: Two turns ago, the opponent had a beastmaster and azure wisp on board, and then played a golem.
In his following turn, he collect 3 times and deals 3 damage, hence 17 life. There is an uncollected faeria in one of the wells.
He then uses aurora’s creation and plays a second golem.
Finally, during the production phase of the next turn (shown in the screenshot), the player is initially dealt 2 from the opponent collecting the uncollected faeria, and then further dealt 16, which ofc is lethal.

Hopefully this addresses any confusion associated with Bloodstone golem.
There is no bug, it works fully intended, and it has always been this way since its first release.
Thanks for reading

Very well put together man! Next time I see someone complaining about this on reddit I’m sure gonna redirect them here!

Amazing summary! I always pointed people to the highlight I have for this interaction from a few years back just after the treasures were introduced but really cool to see the testing and confirmation of the way it works.

Very nice…but u still were 3 faeria of lethal.