They’re here! The first of our World Bosses have arrived, and they’re bringing with them even more.

Today we release the first three World Bosses of Faeria. World Boss battles are a new single player feature that sequentially unlock as you gain levels. World Bosses are, as their name implies, challenging and unique missions that provide special rewards when defeated. These rewards include large amounts of gold (500 Gold per boss), experience, and the construction and upgrade of the brand new Orb of Champions.

These new bosses await you in game right now. Throughout the month of June, we will be introducing more World Bosses each week.

This week’s World Bosses are:

These mighty challenges should give you a sufficient taste for what is still to come. World Bosses will be accessible via a new in-game map screen you’ll find in the single player area.

In conjunction with World Bosses, we’re releasing what we’re calling Wild Mission Packs. The basic idea behind Wild Mission Packs is to provide an indefinite source of single player content for players who prefer to play solo, or to increase their levels in order to meet the next World Boss.

Wild Mission packs are yet another way we hope to satisfy the clear need many players are expressing for more single player content, and we hope you enjoy them.

Together with the introduction of the World Bosses, which will be providing an extra 6,000 Gold total, we are applying a few changes to some of the current rewards in order to balance the overall rewards experience.

The following changes are being applied:

As always, we keep a close eye on the general state of the game and the balance between all colors, at all levels of play. After releasing six new cards near the middle of last month, we knew it was important to observe their effects and see how players learn to best use these new tools.

Our internal balance analysis takes into account the results of games played on live servers, player feedback, and of course high level tournament play. We read, hear, and watch it all. In the end, it helps us reach a decision we can move forward with.

At this time, being so close to the running of another highly competitive Monthly Cup, we’re not comfortable making any wide, sweeping changes - but we do want to place the game in a state where we feel we can pull more valuable information. Sometimes there is one card that may be so clearly out of line that it can make further judgement calls murky without knowing the results of the state of the game after toning it down a little. We believe, at this time, that card is Triton Trainer. Introduced not so long ago, it has enabled an exciting new deck archetype for Blue that takes advantage of its many Jump creatures. Obviously when designing this card we wanted to encourage this style of deck as playing with high mobility creatures is generally a fun experience. However, it’s currently performing way above where we think it should be, at all levels of play. Therefore, we are implementing the following change today:

These changes should still place Triton Trainer in a desirable place for some styles of Blue decks, but make it a little easier to answer without placing quite so much health value on the field. Reworking Triton Trainer as “attack-boost-only” exposes Blue’s smaller creatures to the standard removal that can normally roast the little suckers mid-leap. Lowering the Trainer itself to a 3/2 also exposes it to both 2 damage and 3 damage removal, meaning it will now be vulnerable, for example, to the punishing removal of Seifer’s Wrath, Soul Drain, and the new Deepwood Stalker.

Once again, we want to be clear that we have our eye on a lot in the game at this time, but we’d like to take things a bit slowly as we fine-tune the existing card base. Faeria is an incredibly complex game, and changing just one cog in its intricate machinery can have wild and unexpected results. We believe that with this change we will be able to make a much more informed decision about what the next steps may be for future balance changes before our first expansion this summer.

Tarum’s Cosmetic set is now available for purchase in the shop. Tarum’s Orb, Avatar, Well and Card Back are also now lootable in Mythic Chests. 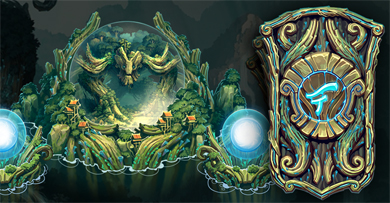 Oh boy! I’ve been looking forward to this!
Though, I figured Triton trainer was going to get nerfed, I wonder if he was nerfed too much. I figured dropping his buff to +2/+0 would be enough, and I understand the reasoning behind decreasing his health, but I wonder if this will be a little too much.

I’m a little surprised as well. I expected more of a +1 +1 but we will have to see how this plays out in the meta. I think on its own it’s not that bad but if other cards start getting nerfed as well it might be necessary to reevaluate this. Either way the biggest proponents against Blue Jump will probably be happier now.

Triton needed that nerf. I think -1 health and -1 Faeria Cost is, while somewhat significant if it comes to Removal, makes him easier to play as well. Outside of Frog there aren’t that many 2 attack creatures that are commonly used I think? Grim Guard, Sagami Grovecaller and ironically the frog are the only ones that come to mind.

Triton Trainer is still a very good card. 3/2 jump and +2/0 for only 3 faeria, that’s 7 stats with jump for 3 faeria, and still enables Ninja Toad to deal 5 damage anytime. Jump alone is worth 1 faeria so it’s still super value. The 1 faeria reduction will make it easier to play as well, you can always do the trainer-ninja combo if you wait one turn, still extremely powerful.

hmmm, it seems almost as if it isn’t really a nerf at all with faeria reduction, but then when I read your description I guess the idea is that it makes blue a lot more vulnerable to removal.

and my guess is that yellow tempo is going to be the top deck, with crackthorn just behind.

you know, you don’t have to do it one card at a time. I think most people would enjoy exploring the dynamics of a new game if you did major sweeping (balancing) changes.