Hi guys, I just got into the Gold Tier and I can see a significant increment in the opponents skills. That’s very good, cause I can effectively encounter challenging matches for my actual knowledge of the game. Anyway actually I have no reason to continue ranking up, cause I’m far far away from the God rank (probably for the next 6 months at least

), the only tier that would add a better reward. So could you think to add intermediate rewards for all players that get to rank 10 and rank 5? They are the checkpoints you have introduced to build the global ranking and the difficulty I’m sure grows quite fast for players. So adding some intermediate rewards could be a great motivation for all the players to continue to play also if they know that are not going to get the God rank in the end season. Also it would be a good gratification for a much harder effort and skill proved 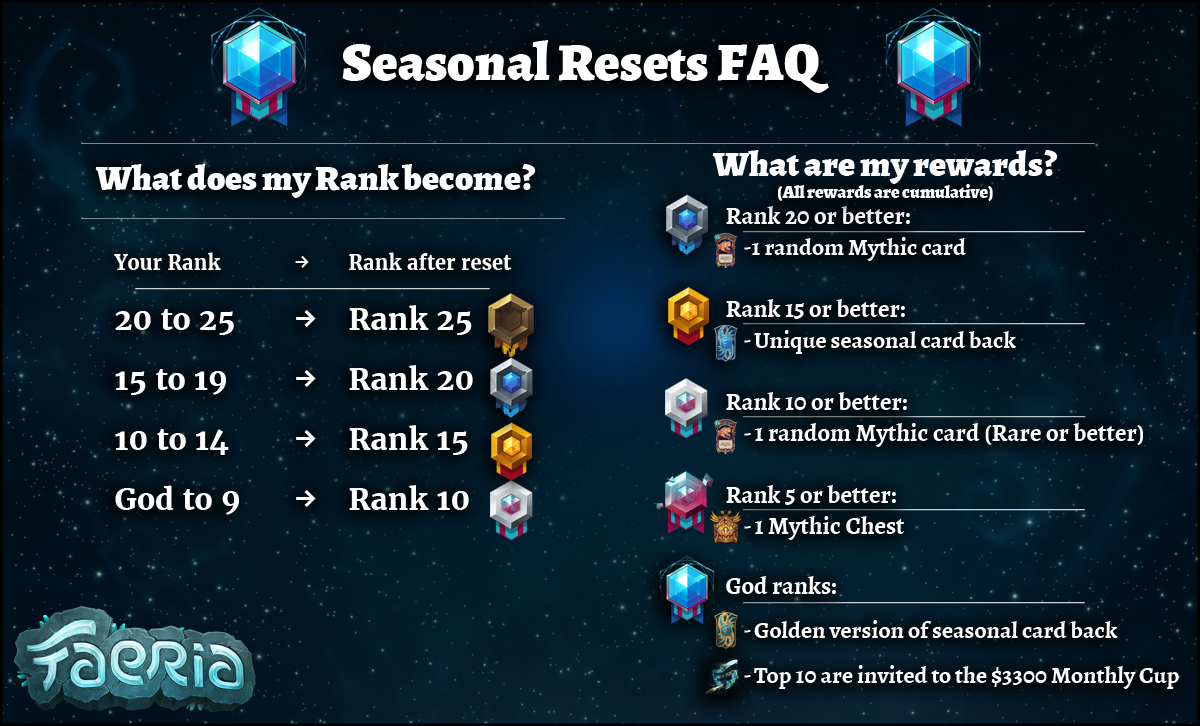 There are rewards for rank 5 and 10. Whether they are good is debatable, but they are there anyway. Used to be pandora coins and something else (I forgot), but not everyone like playing pandora, I guess.

This topic has been automatically created through Faeria’s The Hub. This content can be found here. Seasons in Faeria last about a month. Each season, the ranked ladder is reset, Pandora Points are cleared, and rewards are given for each specific tier that players have reached in Battle Mode and Pandora. The end of each Ranked Season occurs on the first Monday or every month at 12:00pm CET, or CEST depending on the time of the year. Battle mode season reset After each season reset, playe… I think they have to remove this page or update it.
Honestly I have no idea about the most recent between them…

I agree they should remove that outdated version. I also got to gold rank (15 or better) this season and was bummed when I realized I earned a card back instead of 3 Pandora coins.

I’m also not really motivated to push for Rank 10 or better just for the Mythic card (rare or better). Since this is my first season and I’m focused on building my collection, I’m disenchanting any Mythic cards I get when I already have 3/3.

It’s those little crumbs that would really make me feel better about hopping into Ranked. Not saying it has to be memoria, but any similiar micro-rewards would be greatly appreciated

The cross posting is nice in that it gives the guides more visibility. Too bad it also leads to people finding the forum posts on google later and getting outdated information from them.

Players finding this old graphic from search engines is definitely not ideal. I’ve edited the forum post so at least they shouldn’t be able to find the old image anymore.

Ok, progressing into the ladder now I have the possibility to try to reach God rank in these weeks before the reset, but the reward isn’t really attracting actually after rank 5, to be honest. A Golden Seasonal card back could be interesting for guys who likes cosmetics, not others like me

So many players have really no reason to play more to archive the top rank. Could you think to add something more motivating?